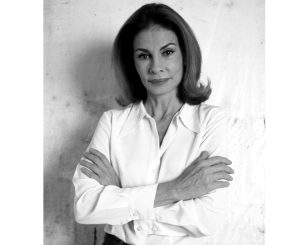 Sophia Vari (B. 1940) is an acclaimed Greek artist who was born in Athens, to a Greek father and a Hungarian mother. Vari spent part of her childhood in Switzerland, studied in Greece and France, and nowadays lives between Greece, Monte Carlo and Pietrasanta (Italy). Sophia Vari’s work is a reflection of her multicultural upbringing, her artistic language is distinct and informed by a multiplicity of influences from Mayan, Egyptian, Olmec, and Cycladic traditions as well as Ancient and Baroque aesthetics. Internationally renowned as a painter and a sculptor in her own right, she is also married to the well-known Columbian painter Fernando Botero.

Vari’s sculptures have evolved through several stages in the last few decades. While her early work from the 1960s onwards was mostly figurative, in the 1980s, Vari began to employ rounded abstract forms that suggested the human body. Eventually she began incorporating planar and constructed forms into her work, and by the mid-1990s she had begun to apply colour to the surfaces of her dynamic sculptures. This use of colour contributes to the movement of Vari’s pieces, and her sculptural works, created both on a monumental scale and as table pieces, appear to move autonomously as the viewer walks around them. Her work across all media shares a certain playfulness and liveliness, with compositions in collage, watercolour and paint pushing into the realm of dimensional space.

Celebrated with almost 120 solo exhibitions to date over the course of her career, Sophia Vari has had museum exhibitions including Palazzo Vecchio, Florence, Italy; the Palazzo Bricherasio, Turin, Italy; The Ludwig Museum, Koblenz, France; and more recently, the Pera Museum, Istanbul, Turkey. Solo exhibitions of Vari’s monumental sculptures in the public realm have taken place in cities including London, Paris, Rome, Montecarlo, Baden-Baden, Geneva, Pietrasanta, Athens, Madrid and Cartagena de Indias, among others.