News July 09, 2019 Elisabetta Cipriani
The Telegraph Discovering the right Foreign Brides to be Websites To meet your needs

Elisabetta Cipriani sat down with Liliane Lijn, an extraordinary artist, whose diverse artistic career spans across more than four decades. Since the early 1960s, Lijn has worked as a revolutionary artist in the field of kinetic art – working across media to explore the interplay between language, movement, mythology, light, matter, science, and technology. We invited Lijn to discuss her wearable art sculptures, which are rooted in the vitality of planet earth.

EC: Your wearable sculptures push the boundaries of jewellery. Each piece has a raw, organic aesthetic and is a direct reference to geological forms, such as lava, fossils, and meteorites. Why does the dynamic earth interest you?

LL: I have always felt very close to nature, more than that, I am nature and I want to be aware of this reality. We now know that life on this planet is delicately balanced, that the planet is alive with an infinitely complex ecosystem. As a small part of it, I try to examine it, much as a child would, by playing. 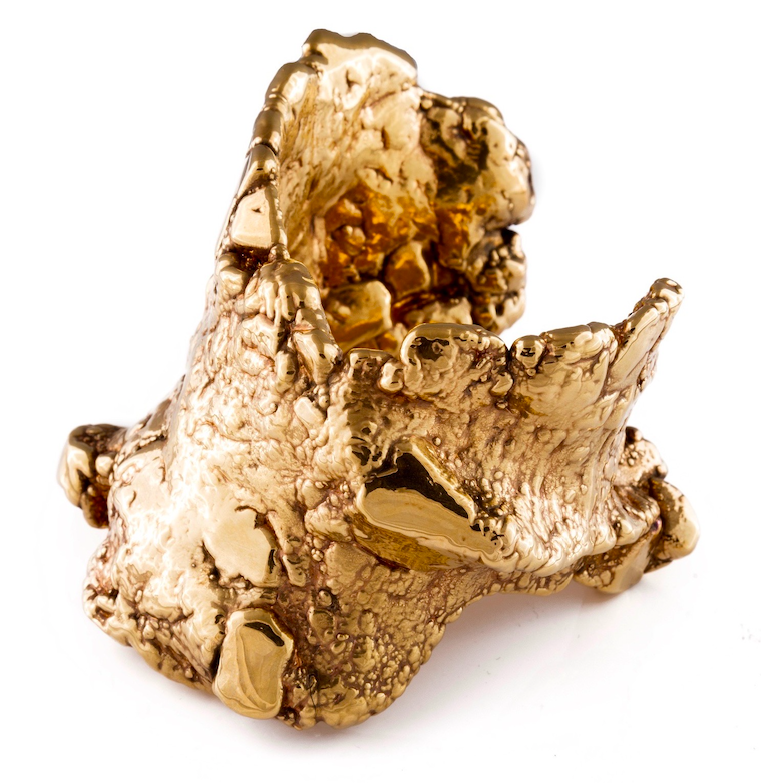 EC: You once said that you want people to “wear the earth.” What do you mean by this?

LL: We all wear the earth. We walk around with bits of its minerals attached to our bodies, cleaned and polished and often made to appear as if they had nothing to do with the earth we tread. Our clothes are made from the plants grown on its soil or taken from other animals who share this planet with us. I want to make something wearable that looks as if it might still be part of that earth. I want my wearable art, my jewellery, to encourage people who wear it to feel that they are wearing the earth.

EC: In 2013, your wearable sculptures were exhibited at the Earth Body Art exhibition held at The Civic Museum of Santa Croce, Umbertide. Your manifesto for the exhibition comprised of three essential principles: Earth as a vital substance shaping existence; Body as the dynamic generator of life; and Art as a creative force that connects the mind to the body. Could you talk to us about these core principles and how they come into play in your wearable sculptures?

LL: Deep in the earth’s core, liquid magma keeps our planet alive and spinning. It is this magma that outflows during volcanic eruptions, bringing both death and renewal to the earth’s surface and upon those who live on it. The chemicals that outflow from volcanic eruptions are thought to have started life on earth. Humans have always been close to the earth, the soil. It is only in the last century that our relation has shifted away towards space. We have a tendency today to live in our huge brains and in the fantasy worlds that it creates for us. I believe that it is important to consciously live within one’s body. Art focuses the mind and allows the artist to enter into matter, into materials of many different kinds. Through this exercise, body and mind merge.

EC: You are an artist who has always forged a close alliance between art, science, and technology. How do you perceive the relationship between these differing disciplines, and why do you enjoy exploring this in your artistic works?

LL: Art, science, and technology were closely connected until the last century, when science developed so rapidly that it had to split into a myriad of diverse specialisations. Education also encouraged the separation of art and science. I had a classical background but in the early 1960s, I found a new kind of poetry in scientific texts and diagrams. Modernism appeared concerned with images of reality and I wanted to look beyond the image, beyond what we could detect with our five senses. Science and technology are doing just that. I was attracted by the immaterial and discovered that the photon, the particle of light, had no mass. Particle physics seemed to pursue reality to the extreme, looking for the answer to ‘what is reality?’ Technology allowed me to work with very diverse materials and innovative ways of using them. For example, my jewellery is not cast metal, instead I use electroforming, which allows me to make large silver or gold cuffs that are very light. 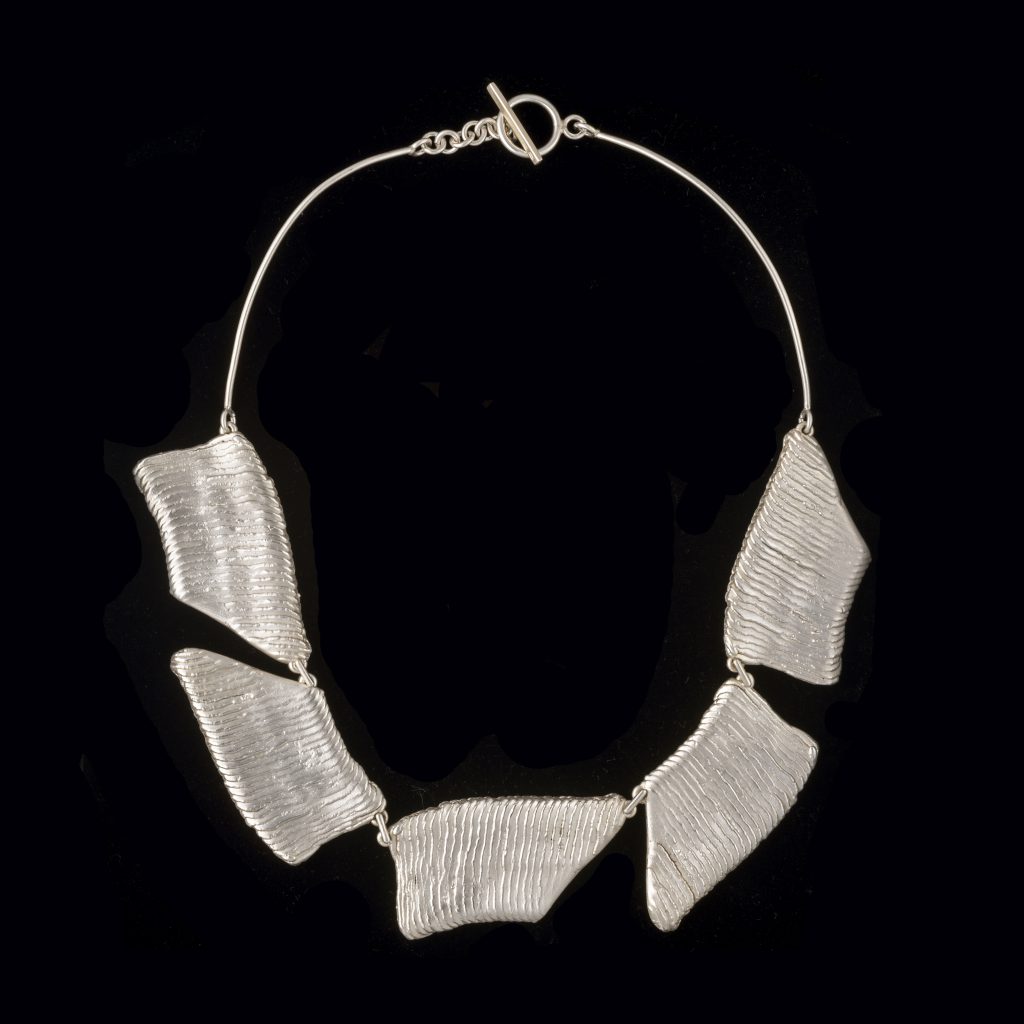 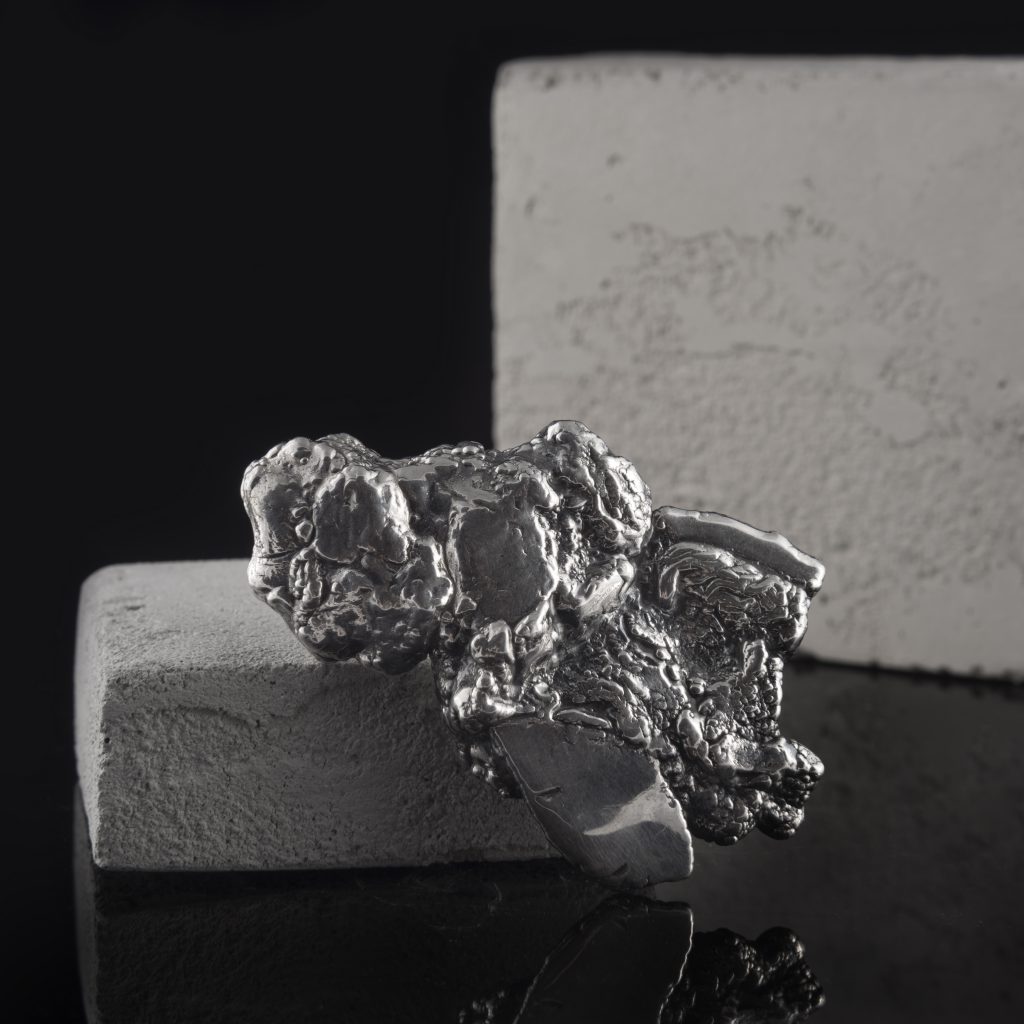 EC: Prior to the 1990s, you primarily worked with industrial materials. What made you turn your attention to working with more traditional and organic materials like fire, bronze, and wax in your later works?

LL: Actually, I started working with clay in the 1970s because I felt it would bring me closer to my body. I had been working with industrial materials and technologies such as precision engineering in metals and plastics and I worked with fabricators, imagining, thinking and drawing up what I wanted them to make. I wanted to get closer to the material I worked with and to use a malleable material. I started with clay but instead of baking the result in a kiln, I used sand casting. Over a period of time this led me to work with hot wax, bronze and blown glass.

EC: Continuing this topic of materiality, your artistic practice is all about engaging with the concept of dematerialisation – a process which is also explored by the likes of Alberto Giacometti and Eduardo Paolozzi. What does dematerialisation mean to you?

LL: I was very interested in dematerialising, in the idea of becoming pure energy, but now I realise that the immaterial and the material coexist. An interesting example from physics is that, when two opposite particles meet – an electron and a positron – they disappear in a flash of light. Belonging to a series of conical sculptures which I started in 1965, Space Displace Koan, now in the Tate Collection, is layered with elliptical coloured sections lit from inside. The cone spins slowly at a constant speed so that the viewer’s eye focuses on the lines, which in turn appear to dissolve the volume of the sculpture. It is as if the lines move through the volume, whereas in fact the volume is spinning as a whole. 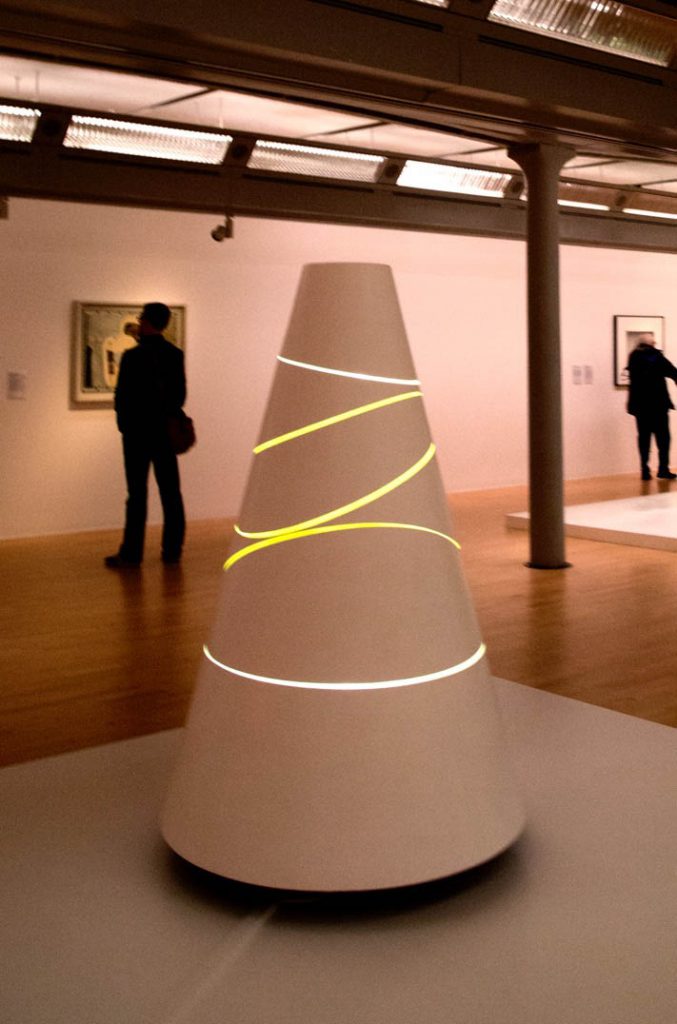 EC: Whilst living in Paris, you met with major artists, including the likes of André Breton, the ‘father’ of Surrealism. What impact did Surrealism have on your artistic practice?

LL: Surrealism was an important influence on my practise. The Surrealists were interested in a very wide range of disciplines and human enquiry. Thus, philosophy and theosophy, science and magic, astronomy and astrology, mythology, anthropology, archaeology, poetry, the rational and the irrational, dreams; the list of their interests is endless and from the start of my practice, Surrealism was a green light to explore widely without prejudice or restrictions.

EC: Several of your artistic works, such as Fire my Soul (2000) and Lilith (2001) explore themes of female energy and mythology. In a sense, given that many collectors of your wearable sculptures are women, your jewellery pieces encapsulate this close relationship between women and earth and the concept of women as generator of life. Do you see a relationship between the feminine and earth?

LL: Women have been traditionally connected to the earth. In my work, I have tried, on the contrary, firstly to escape into the immateriality of the sky and then later to invest the feminine with a plethora of associations. In my work, Conjunction of Opposites (1983-86), two female figures appear as birds and insects, part human, part machine. Both Lilith (2001) and Fire my Soul (2000) are self-portraits but in Fire my Soul (2000), the fragmented pieces of bronze that mirror myself are pierced by layers of mica, recalling the mineral world and run through with neon, an electrified gas, whereas in Lilith (2001) gas bursts into flames, eventually depositing a black carbon residue on the bronze body. In the end, we are essentially carbon. 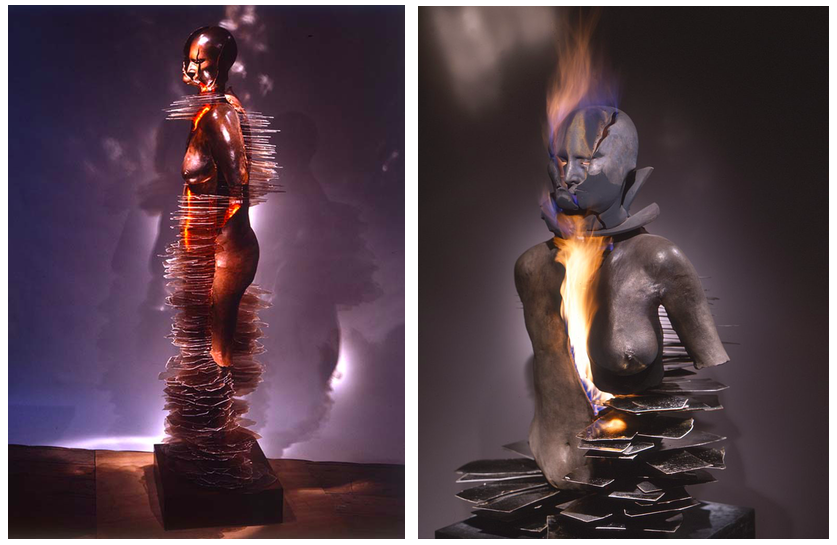 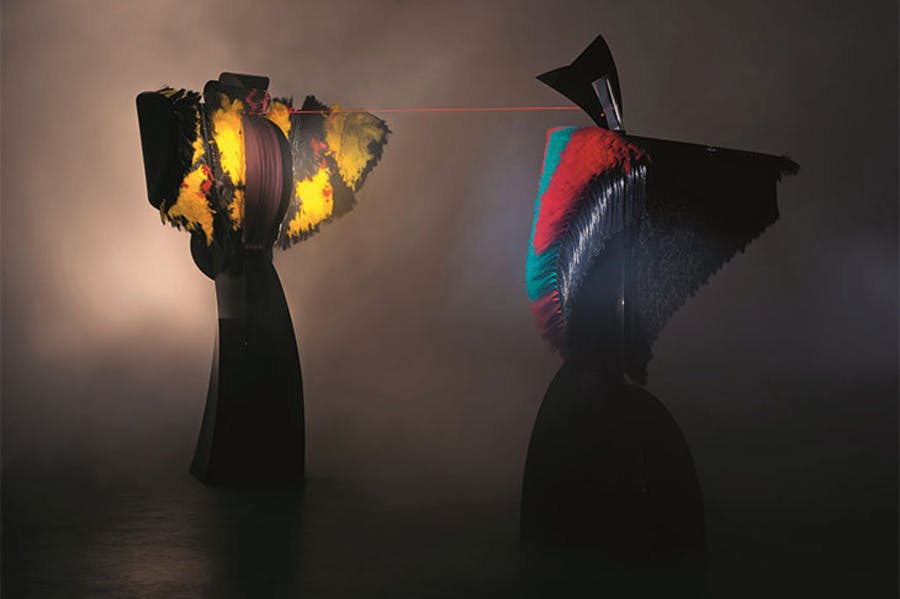 EC: It’s been a wonderful journey collaborating with you to create your Fossil Twist necklace, for which you combine both silver and gold for the first time. How do you approach jewellery as a unique artistic medium of expression? How is this similar or different to your broader artistic practice? 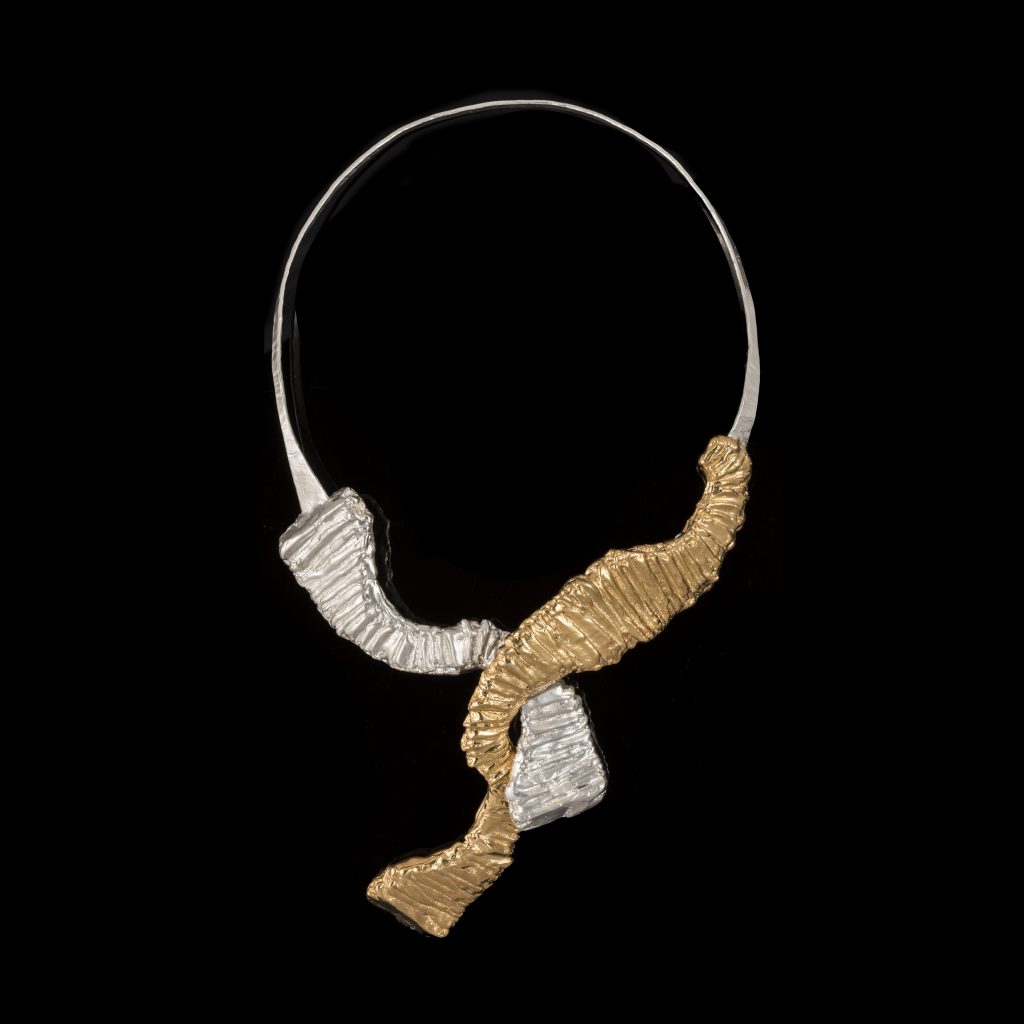 LL: I approach jewellery-making in the same way that I approach all my work as an artist. I play with the materials I use, observe their reactions carefully, follow their changes and make decisions. I find it no easier to make a beautiful ring or bracelet than to make a much larger sculpture. Some of my works are developed from visions, dreams or ideas, and others from observations of the world around me or the materials I work with. Earthart began when I started working with hot wax and noticed how it behaved as it cooled. Different waxes behave differently and that can create a problem or an interesting discovery.

EC: Collectors of your wearable sculptures have expressed that wearing your jewels is like wearing fragments of organic and cosmic matter, which have somehow moulded themselves around one’s body. In a sense, your pieces can be viewed as contemporary talismans that are able to direct terrestrial and extra-terrestrial power to the wearer. How do you envision the wearers of your earth body sculptures?

LL: In the Old Hebrew testament ‘glebe’ was the primal earth, from which the first humans were formed. I intend my jewellery to be worn, as if one were moulding a clod of ‘glebe’ to a part of one’s body. Volcanic magma, clods of earth, meteorites, lunar rocks, my sculptures to wear are essentially reminders of our origin. I hope that my earth-body sculptures will bring renewed energy to their wearers. 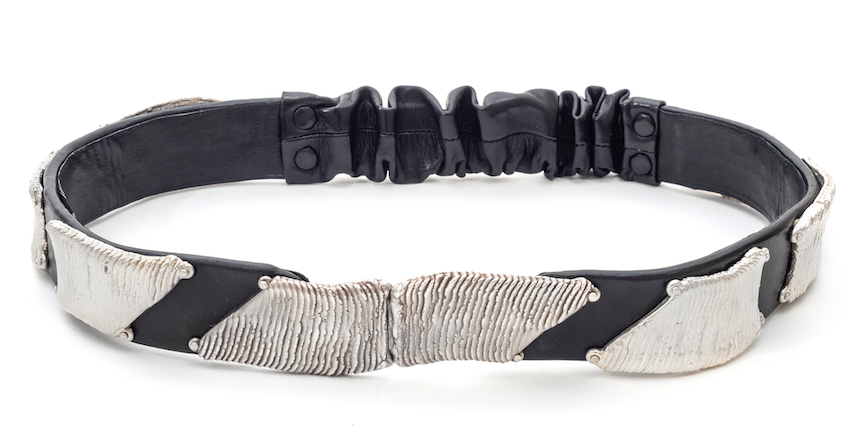 Ultimately, Liliane Lijn’s powerful earth-inspired wearable sculptures are timeless and encapsulate the artist’s interest in nature and its mysterious formations.