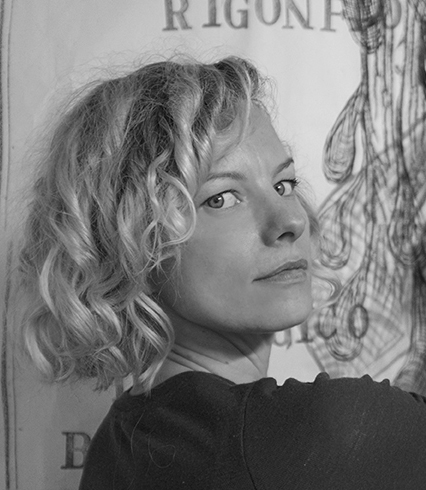 Born in Bologna in 1977, Sissi (aka Daniela Olivieri) is an Italian artist who currently lives between London and Bologna.

Sissi studied at the Accademia di Bella Arti in Bologna where she graduated in painting in 2001. That same year, she was selected by the Antono Ratti Foundation to participate in the advance course of Visual Arts which was then held by Marina Abramovic.

With the performance ‘Daniela ha perso il treno / Daniela lost the train’ in 1999 the artist adopts the pseudonym of Sissi, abandoning her real name. The international art world soon recognised Sissi’s work as original and innovative which has been accentuated by her performance Aerea at Moca in Miami in 2001 and in the same year by Vetroninfea in Watou in Belgium. Acclaimed by the curatorial world, in 2002 she is awarded with Premio Furla/Furla Art Prize at the Querini Stampalia Foundation in Venice.

Sissi’s investigation into the subjectivity and into the social and emotional construction of the body starts with a performance and is linked to an emotional anatomy which is constantly experimented trough different media: performance, sculpture, drawing and photography.

In 2008, Sissi’s work evolved from performances to sculptural installations which are enriched with new elements such as: ropes, ceramics, drawings, canvases, and clothes. She mainly uses the practice of intertwining, realising works where wool, iron or plastic wires, or natural elements like rattan, are hand-woven by the artist in the form of placenta cocoons and nests which become shelters for the body and which are animated by Sissi herself with her performative act.

Sissi participated at several one-man and group exhibitions around the world and she successfully gained recognition also by participating at the Venice Biennale of 2009 in the Italian Pavilion. Sissi won considerable important prices including among others, Gotham Prize promoted by Ministry of Foreign Affairs in New York (2012); New York Prize at Italian Academy of Columbia University (2005); Francesca Alinovi Prize for performers at Gam Gallery of Modern Art in Bologna (2003) and the Furla for Art at Fondazione Querini Stampalia in Venice (2002).