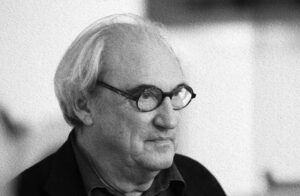 Giampaolo Babetto (born 1947 in Padua, Italy) is one of the most influential exponents of the Avant-Garde goldsmiths’ scene since the mid 1960s. He is one of the veterans of the Padua School and has significantly moulded the image of art jewellery in Italy and around the world. He has been classified a mixed media artist, working not only on jewellery but also on silver objects, furniture design and architectural projects.

I identify myself with the jewellery I create. Every time it’s a new challenge, because I know that what I create must be a living object, not just something sitting in a window, and it has to appear even more beautiful when worn around a woman’s neck, her wrist or her fingers. Giampaolo Babetto

Giampaolo Babetto’s work reflects contemporary art movements such as concrete art, minimal art, kinetic or pop art in a unique, purist and plastic manner. His pieces are immediately recognisable by its simple design. He is inspired by the architecture of his homeland, by Palladio’s villas, and by the geometries in which he finds poetry. His jewellery is innovative in concept. Made up of different abstract elements, broken down into modular units, or rendered moveable through the use of ingenious links, Babetto’s works are like small architectural pieces or small sculptures. Babetto prefers working in gold due to its stable malleability and its warm sheen which he combines with unconventional materials such as plastic or glass, ebony, dusting the internal surface with a velvet-like pigment in luminous primary colours of reds or blues or using enamel and age-old niello-based techniques. These materials are used as highlights and contrasts in works of increasingly pure and essential geometrical forms that have come to characterise the Padua School.

The artist achieves a personal artistic language in which the use of geometrical forms is targeted towards and absolute minimalism where attention is focused on the idea, stripped of all the mere decorativism.  For Babetto the design is methodical, introverted and rational, its realisation is impulsive, rapid and passionate. “I am a combination of rationality and impulsiveness. When I have an idea or concept in my mind, I want to realise it in the most linear way possible. Once I have found the mechanism, I want to achieve it as quickly as possible, and I throw myself wholeheartedly into it”. The result is works taken to the extreme essence of form and line that allows those looking at them to instantly perceive the formal tension and the impact of the composition. Every one of them reveals his passions, his love for architecture and his eye for detail.