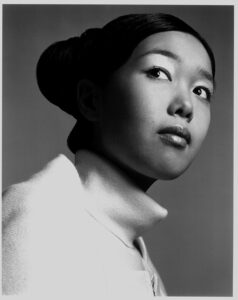 Mariko Mori is widely regarded as one of the most important artists to emerge from Japan in the past fifty years. Her practice, which is founded in the belief of the interconnectedness of all things, explores universal questions at the intersection of the cosmos, life, death, reality, spirituality and technology.

Her early work found its roots in Manga and cyber culture, often depicting Mori herself as a cyborg heroine seemingly from an alternate, pop-futuristic reality, navigating contemporary Tokyo. Her work has since expanded beyond that densely-layered, colorful hyper-reality to include a recent fascination with ancient cultures. Among cultures newly explored in Mori’s work are the prehistoric Jomon culture in Japan and Celtic traditions in Europe, investigating a more abstract minimalism and celebrating the enlightening and expansive qualities of technological innovation and its interaction with its surroundings.

Employing a diverse range of media including installation, sculpture, performance and works on paper, her practice blurs the lines between sacred reverence and popular culture aesthetics, using references from disparate visual iconographies to create works that conflate the past and future as well as the scientific and spiritual.