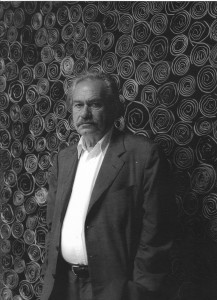 Jannis Kounellis (Greece, 1936 – Italy, 2017) was one of the world’s leading contemporary artists with a career spanning more than forty years. Kounellis’s work developed as a spectacular mixture of painting, collages and the staging of installations, ‘environments’, performances and theatrical shows, designed to express the tensions and alienation of contemporary society, and the multiplicity, obscurity and fragmentation of its language.

He was a prominent member of Arte Povera, and his work was characterised by the juxtaposition of objects, materials and actions that were both physically and culturally antithetical to one another. Although starting as a painter, in the 1960s Kounellis introduced the use of everyday materials to his work – such as wool, coal, iron, stones, earth, wood and objects trouvés – as well as animals to create sculptures and installations.