Force of Nature The first-ever selling exhibition from Melanie Grant at The Elisabetta Cipriani Gallery, launching on 18th November during a special evening with our friends from Serpentine Galleries.   Grant continues her mission to dismantle the boundaries between art and jewellery by inviting 18 renowned contemporary artists to express their connection to nature through wearable sculpture.   London, 22nd October 2021 – Continuing on from her book Coveted: Art and Innovation in High Jewelry, the first modern jewellery book published by Phaidon where she asked the question Can Jewellery be Art? To Brilliant & Black: A Jewelry Renaissance, the first-ever exhibition of it’s kind dedicated to black jewellery designers staged at Sotheby’s New York in September 2021 – Melanie Grant presents a third project Force of Nature, aimed at further dismantling the remaining hierarchy that separates art and jewellery. Force of Nature will feature nearly 40 jewels dedicated to Naturalism and the evolution of our relationship with the outside world, created by 17 contemporary artists embracing both figurative and abstract approaches.  They are: Ai Weiwei, Bibi van der Velden, Fabio Salini, Frank Stella, Giorgio Vigna, Giuseppe Penone, Grima, Jacqueline Rabun, James de Givenchy, John Moore, Joy BC, Liv Luttrell, […]

LIGHT WORKS Andrea Hamilton and Aigana Gali with Elisabetta Cipriani Gallery and Stories of Art 21 – 29 May 2021 68 Kinnerton Street, SW1 From 20 May works from the show, plus the artists in conversation with curator Nico Kos Earle, can be viewed online: www.elisabettacipriani.com/blog/lightworks AH Studio presents Light Works, a meditation on light, the theatre of colour and the sacred geometries found in wild places, by artists Andrea Hamilton and Aigana Gali with Elisabetta Cipriani Gallery and supported by Dina Kemal Marchant, founder of Stories of Art. To mark the end of lockdown, this lyrical show celebrates how light interacts with the material world to show us essential truths. Like the coming of spring, colours illuminate the underlying structure of our surroundings, give us a sense of time and highlight our place in the world. The exhibition will feature paintings, textiles, murals, photographic works and jewellery, with the pieces showcased tonally, chromatic threads tying the different media into a meditation on the many ways we see and experience colour. For fine art photographer Andrea Hamilton, painter and textile artist Aigana Gali, and gallerist Elisabetta Cipriani, 2020 was a year of deep reflection and productivity. They have respectively produced […]

A Conversation with Maria Nepomuceno

Vases (Vaso Vida), 2021 necklace and ring (necklace vase 5.5 x 7 cm; ring 3 x 3 cm) Edition of 10. Signed and numbered   The Brazilian artist Maria Nepomuceno creates imaginative and playful contemplations of the world around us. Through her original technique of sewing coloured ropes into vivacious spiral shapes, Nepomuceno’s work explores the regenerative powers of human bodies, human societies and human interactions with nature. The Financial Times magazine called the artist’s bright, biomorphic forms ‘an alternative to wasteful consumerism’, and across the globe world-renown art institutions such as the Barbican Centre in London, The Norval Foundation in Cape Town, Museu de Arte Moderna in Rio de Janeiro have commissioned her to brighten their spaces with her colourful, thought-provoking sculptures. Nepomuceno has worked with the indigenous braiders of Brazil’s north eastern Acre region, and she brought together a group of artisans in Margate, England to create her Turner Contemporary installation – her practice is continuously enriched and inspired by the partnerships she creates. Elisabetta Cipriani Gallery is proud to become part of her collaborative artistic process, and we are thrilled to present to you the artist’s first wearable art project. E.C: Your wearable art project Vases (Vaso Vida) is […]

Having recently won the Gold and Silver awards by The Goldsmiths’ Craft & Design Council Awards, which are considered as the “Jewellery Oscars,” Ute Decker’s works can only be characterised as expressive, three-dimensional “Geometric Poetry”. Her unique, and limited edition pieces have become such a beautiful, distinctive mark to Decker that they have become so avidly collected, with her works sitting in the public collections of the Victoria and Albert Museum, the Musée Barbier-Mueller, the UK Crafts Council Collection and the Swiss National Museum. Elisabetta Cipriani sits down with Ute Decker discussing her highly acclaimed Wearable Art collection. EC: When did you start making jewellery and why? UD: I was 40 when I first exhibited my work – not really a youngster. My background started with studies at the Sorbonne, then a degree in political economics – I worked as a linguist and dabbled in journalism with stints at the UN and CNN. But during all this time there was always a creative urge; taking courses in sculpture, philosophy, photography, ceramics, silversmithing, jewellery and numerous others. It was, however, jewellery that I returned to again and again for over 20 years. Eventually in 2009, I accepted an invitation to take […]

Celebrating a Decade of Wearable Art: An Interview with Elisabetta Cipriani

Elisabetta Cipriani’s pioneering concept of wearable art has redefined the meaning of, and the boundaries between jewellery and fine art. Since 2009, her powerful artistic collaborations have captured the imaginations of collectors from across the globe. Today Elisabetta’s gallery is a world-leading artist jewellery gallery representing over two dozen international contemporary artists. This year, Elisabetta celebrates her ten-year anniversary in the wearable art business. We sat down with Elisabetta to look back on her incredible journey over the past decade. What inspired you to start your wearable art business? I have always had a passion for antique jewellery ever since I was a child. Back then, I didn’t know anything about artist jewellery, but I had a passion for beautiful objects. My mother actually used to take out her jewellery with me while I sat on her bed. As I tried on my mother’s jewels, I would constantly ask her if, one day, I could have not one but all of them! Elisabetta’s parents in the 1990’s For me, I’ve always had a passion for jewellery deep in my heart. After finishing school, I really wanted to study jewellery design. I ended up doing a short course on pearls and diamonds, […]

The evocative art of Giorgio Vigna is rooted in nature’s metamorphic phenomena. He fluidly interchanges the artistic mediums of sculpture, works on paper and jewellery, inviting us to understand our relationship with the cosmos through engaging our senses. His works trigger our imagination through their textures, sounds and movements, evocating the mystery of our attraction to the natural world. In celebration of Elisabetta Cipriani’s 10 years of collaborations with the world’s leading visual artists, we invite one of the gallery’s first partners, Giorgio Vigna, to discuss his relationship with wearable art. GV: It makes me very happy to know that I am one of the first artists your gallery represented. It has now been ten years! EC: Yes, it all started with our first collaboration. You were there from the beginning. How has this journey together been like for you? Giorgio Vigna, Segmenti, 2018, oxidised silver and 18 kt yellow gold necklace, unique and signed.Photography credit: Francesca Moscheni.     GV: I know that you appreciated my art even before you opened your gallery. Working together has been important for me because it has always made me feel that I was in good company. It also gave me the opportunity to show some of […] 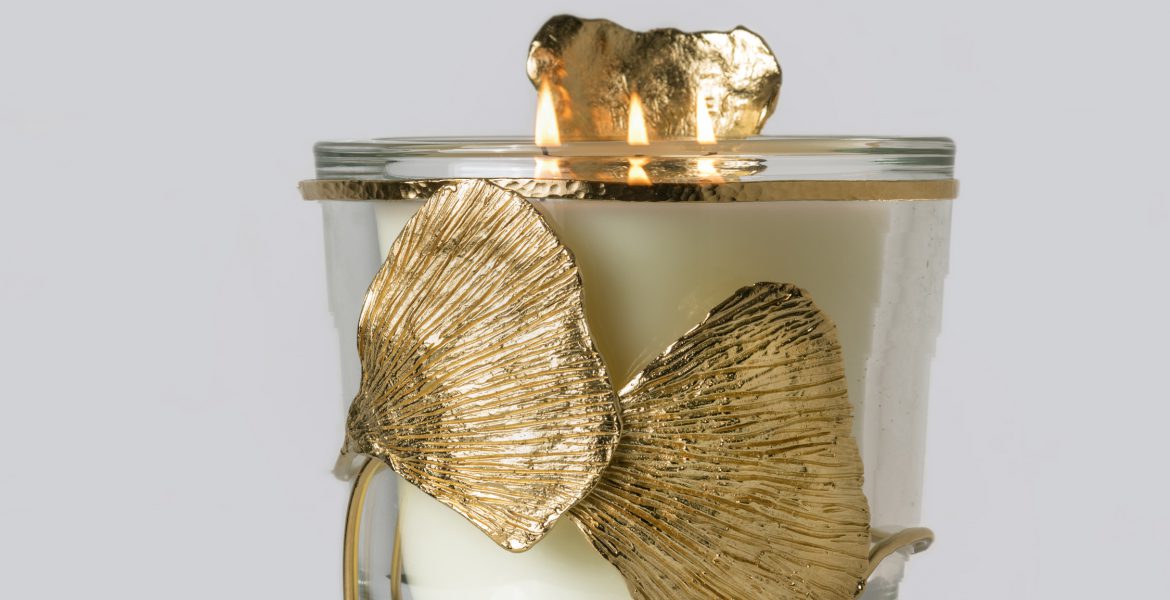 Exhibition opening: Monday 3 December 5.00 – 8.30pm. Elisabetta Cipriani is very pleased to present the two latest collaborations. The She-Wolf, the Eagle and the Octopus are creations by the Italian artist Paolo Canevari made in a limited edition of 5. Together the three objects of art constitute a sophisticated set of zoomorphic silver serving cutlery inspired by three animals which across human history have been associated with symbols of power: the She-Wolf, the Eagle and the Octopus, eyes made of diamonds, rubies and pearls, respectively. Through employing these archetypal images yet using them in a new context, the artist puts their meaning in jeopardy and invites us to reflect on the iconography of power. Ania Guillaume interpreted Bruno Acampora’s luxurious scented candles through sculptural holders Sérénité, inspired by gingko leaves. These will be displayed alongside other renown scents of the perfumery. With the artists interest in nature’s intricate spirituality, she purposefully chose the gingko leaf not only for the folliage’s singular beauty, but mainly for its meaningful symbolism of longevity and wellbeing; qualities deeply rooted in Acampora’s identity and its wonderful aromas. Recollections of the natural world will be augmented by our showcasing of Michele Oka Doner’s Goddess Minaudiere (2007), a sterling silver clutch that in its shape recalls nature in its purest […]

Exhibition Opening: Wednesday, 28 November, 2018, 6:30 – 8:30pm. Elisabetta Cipriani is very pleased to present Carrying Memory, the first wearable art project by performance and poetic installation artist Chiharu Shiota. Through the use of 18kt gold, Chiharu Shiota intricately intertwines and folds threads which gradually expand into the universe, becoming an extension of the body in space. A necklace and a ring that can also be used as a pendant, have been conceived and perceived in the same way as Shiota’s thread installations, in which she integrates, within a web, objects that carry memories of our daily life. For the necklace, Chiharu Shiota chose to create the art piece around a key, a meaningful object related to everyday life. Viewing keys as “familiar and very valuable things that protect important people and spaces in our lives”, the artist invites us to make a profound and treasured connection with the necklace. Within the golden threads, Shiota suspends the contrasting silver key with a powerful, dark and dreamlike potency. The traces left behind by a human life are also conceptually explored in the ring/pendant, which is made entirely of golden webbed threads to symbolise the inside of a human body. These two poetical […]