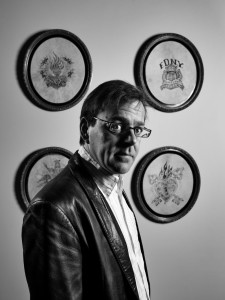 Wim Delvoye (Belgian, b. 1965) is a neo-conceptual artist known for his inventive and often shocking projects, with a great focus on the body. Delvoye repeatedly links the attractive with the repulsive, creating work that holds within it inherent contradictions – one does not know whether to stare, be seduced, or to look away.

He has an eclectic oeuvre, exposing his interest in a range of themes, from bodily function, to the Catholic Church, and numerous subjects in between. Delvoye was not from an especially artistic background, a fact that he feels has allowed people to identify with his art in a way that is difficult with more traditional forms of art.

The ideas he continues to work on to this day were conceived from the very start of his art career. Delvoye views his role as an artist as one of constant refinement and re-exploration.

He has participated in a great number of major international exhibitions, including the Venice Biennale (1990, 1999 and 2009), Lyon Biennial (2000 and 2005), Beijing Biennale (2011), South Korea (1997), and Montenegro (1997). Delvoye has had major solo exhibition around the globe, including at Pushkin State Museum of Fine Arts, Moscow; Musee du Louvre, Paris; Palais des Beaux-Arts, Brussels; and Peggy Guggenheim Collection, Venice.