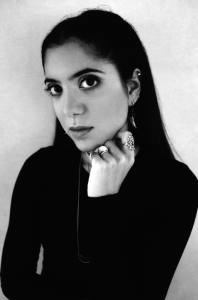 Noor Fares creates jewellery with soul. The Lebanese designer is renowned for her colourful modern-day talismans that combine ancient symbolism and contemporary style. A lifelong cultural nomad, Noor incorporates the discoveries she makes in her world travels in her designs. Whether it be the mystical symbolism of Hindu mandalas in India or the intricate geometric patterns found in Middle Eastern architecture, she is inspired by unexpected beauty wherever she goes.

Passionate about jewellery and gems from an early age, Noor studied History of Art at Tufts University in Massachusetts before going on to the GIA in London to learn about the world of precious stones.

She established her eponymous collection in 2009 and quickly made a name for herself. Fares intends for her pieces to become one with the wearer and hopes they will be treasured for the rest of their lives. “I try to create pieces that are innovative yet at the same timeless,” says Noor, who also has a Masters in jewellery design from Central Saint Martins in London. “I always consider when I’m designing a piece whether someone will want to wear it in years to come.”

Inspired by ancient beliefs in the healing energies of stones and minerals, she communicates their mystical powers in her kaleidoscopic designs. The designs have been worn by Kate Winslet, Sienna Miller, Salma Hayek and Naomie Harris.