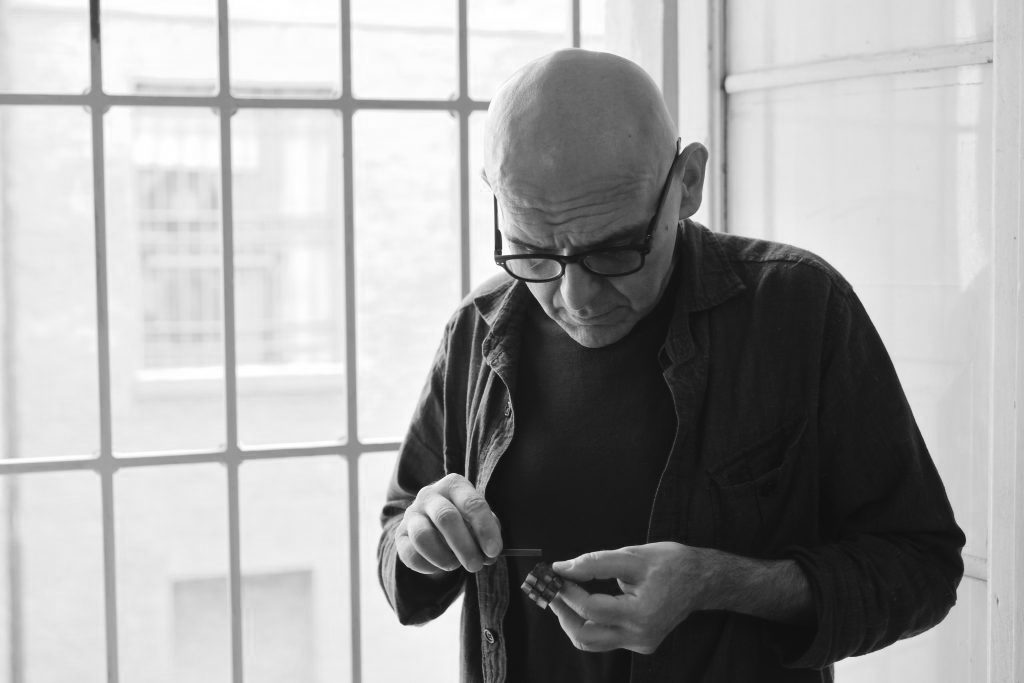 “The traditional goldsmithery of Gigi Mariani is transformed into informal primitive and sculptural forms, in which niello is the pictorial material applied to canvases of silver and gold”

Born and raised in Modena, from an early age, Mariani began to seek a means of expression through informal painting exploring the possibilities of gesture and materials; as a teenager he attended the workshop of a master goldsmith from whom he learned the meticulously fine art of goldsmithery. Painting and goldsmith thus became the tracks along which Gigi Mariani’s life rolled. For many years these tracks ran parallel, however in 2009, after taking part of a workshop on niello directed by Maria Rosa Franzin and Graziano Visintin of the Padua School of Art Jewellery, Mariani merged the two tracks together and his career as a goldsmith traced a fundamental turning point. The niello technique has had the greatest diffusion in Italy between the Medieval and Renaissance times. It is an alloy containing sulphur, copper, silver and lead, traditionally used to highlight an engraving made with the burin on a metal plate, with which the furrow was filled.

What came after that workshop, gave the artist the opportunity to expand his skills and knowledge on niello opening a rich, creative season where “black” was the leit-motiv of his works. Moreover, his past as a painter traced a new twist on surfaces covered with niello. The light radiating from the precious metals of his jewels acquired a new depth; the rugged surfaces show a new, pictorial sensitivity. The “black matter” of niello, often cracked, refined with precious stones or with gold, speckled with gold traces and granules gave birth to a personal language as well as a distinctive signature.