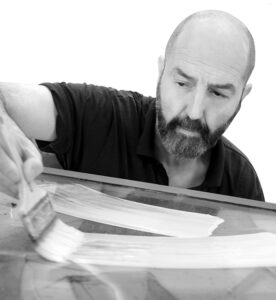 Faust Cardinali was born in Paris (France) in 1961, from an Italian father, a relentless painter, and a French mother. At early age, when he was only nine years old, the family moved to Chiusi del Verna in Tuscany. He starts his artistic journey as a sculptor, painter, and goldsmith designer, crossing simultaneously the various disciplines which frequently influence each other.

In the 80’s Cardinali establishes himself as an alchemical goldsmith as he likes to define himself. The artist’s work deals with the phycology of the opposites: the extreme coarseness of the raw material versus refinement, the mutilating violence of the massive and vulgar versus gracefulness. Faust wearable sculptures and visual art are manifestations of internal phycology.

He focuses on the themes of liquidity, of the fluidity of matter, of the violence of existence in relation to the lightness of the soul. The soul is reflected in the materials used – both poor and precious, often combined with polyvinyl which the artist defines as a “pictorial skin”. Cardinali combines harmoniously and expressively materials like aluminium that he carves using a self-invented technique with gold, silver, precious stones and everyday materials like burned bread that he transforms into fossils. The result are small wearable sculptures containing hidden messages that come to our earth with a “metallic” sensibility to attach themself to the body.

In 2009 Cardinali launched the COPYRITTO concept, stigmatized in his MANIFESTE DU BIJOUX D’ARTISTE announced at the Musée des Arts Décoratifs (MAD) in 2014, on the acquisition by the Parisian Institution of a unique piece signed Cardinali, now exhibited in the permanent collection of the Galerie des Bijoux.

Thus, in point 22 of the MANIFESTO: “Artist’s jewellery can trigger fashionable moods, but it is never an accessory: it does not dress the body, it is another body, even a foreign body. »