Elisabetta Cipriani is very honoured to announce the representation of Sophia Vari extraordinary Wearable Art in the United Kingdom.

“I have always admired Sophia Vari Wearable Art; they represent as a whole, the characteristics of how today’s women should be: bold, sophisticated, practical and unique. Her forms and volumes are particularly accentuated when the artist combines wood with noble metals. There is always a pleasing surprise when looking at her wearable sculptures; the forms theatrically change with the movement of the body and each side suggests a different story”.

“When I create a jewel, I don’t think about a ‘jewel’ but a ‘sculpture’, putting in all my convictions and strength. It is only later that I adapt the sculpture with technical tools to make it wearable.” Sophia Vari 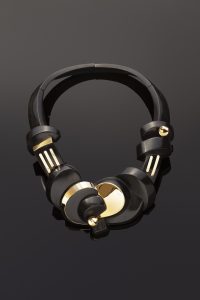 Sophia Vari (B. 1940) is an acclaimed Greek artist who was born in Athens, to a Greek father and a Hungarian mother. Vari spent part of her childhood in Switzerland, studied in Greece and France, and nowadays lives between Greece, Monte Carlo and Pietrasanta (Italy). Sophia Vari’s work is a reflection of her multicultural upbringing, her artistic language is distinct and informed by a multiplicity of influences from Mayan, Egyptian, Olmec, and Cycladic traditions as well as Ancient and Baroque aesthetics. Internationally renowned as a painter and a sculptor in her own right, she is also married to the well-known Columbian painter Fernando Botero.

Vari’s sculptures have evolved through several stages in the last few decades. While her early work from the 1960s onwards was mostly figurative, in the 1980s, Vari began to employ rounded abstract forms that suggested the human body. Eventually she began incorporating planar and constructed forms into her work, and by the mid-1990s she had begun to apply colour to the surfaces of her dynamic sculptures. This use of colour contributes to the movement of Vari’s pieces, and her sculptural works, created both on a monumental scale and as table pieces, appear to move autonomously as the viewer walks around them. Her work across all media shares a certain playfulness and liveliness, with compositions in collage, watercolour and paint pushing into the realm of dimensional space.

Sophia Vari’s “portable sculptures”, as she likes to call them, first became part of the artist’s body of work 30 years ago; at a time in her life when demanding international schedule kept her constantly on the move. While travelling, she carried with her a small box of plasticine, from which she would mould miniature sculptures. “From that day on, I had a new creative challenge that gave me a lot of joy because I could see the pieces being worn,” she recalls. Vari approaches wearable art in precisely the same manner and strength as her abstract sculptures, collages and paintings. Her thorough exploration of bold geometric forms, the examination of volume, painterly curves and lines result in the composition both peaceful and elegant but also captures a harmonious theatrical tension.

“It is a real challenge for me, and it is very much like creating a sculpture, made to be worn. No doubt, the fact that I am a woman has its advantages. Firstly, because I can try it on me – and secondly the fact that I have greater sensitivity compared to a male artist – enables me to highlight the female trait to a greater degree”, says Vari.

Only the highest quality materials from marble to bronze are used in Vari’s large-scale work. Similarly, her wearable art, the pieces combine the most refined materials such as gold, silver, wood, ebony, leather, root emerald, rock crystal and sapphire among others. Each piece of jewellery is a part of a limited edition or is a unique work, incised with the artist’s signature “Vari” and numbered like her sculptural works.
Of her methods, she reveals: “It can take a week, a month or even more to realise a piece. I work until I know that I can’t take away or add anything more.” 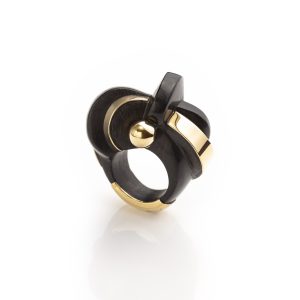