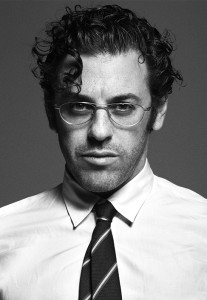 Tom Sachs (American, b. 1966) is a sculptor, who is best known for his elaborate recreations of various Modern icons, all of them masterpieces of engineering and design of one kind or another.

Using a variety of materials, including foamcore, bronze, plywood, automotive paint, and glue, Sachs constructs sculptures of recognizable icons of pop culture, such as Hello Kitty and McDonald’s restaurants.

Many of Sachs’ sculptures are intended to demonstrate the building process, so that screws and seams are deliberately visible; in this way, even works that are considered whole are not necessarily finished.

Sachs studied at the Architectural Association in London in 1987 and earned a BA from Bennington College in Vermont in 1989.

Sachs’ works have been exhibited at the Centre Georges Pompidou in Paris, the Museum of Modern Art in San Francisco, CA, the Whitney Museum of American Art in New York, NY and the Solomon R. Guggenheim Museum in New York, NY, among many others.