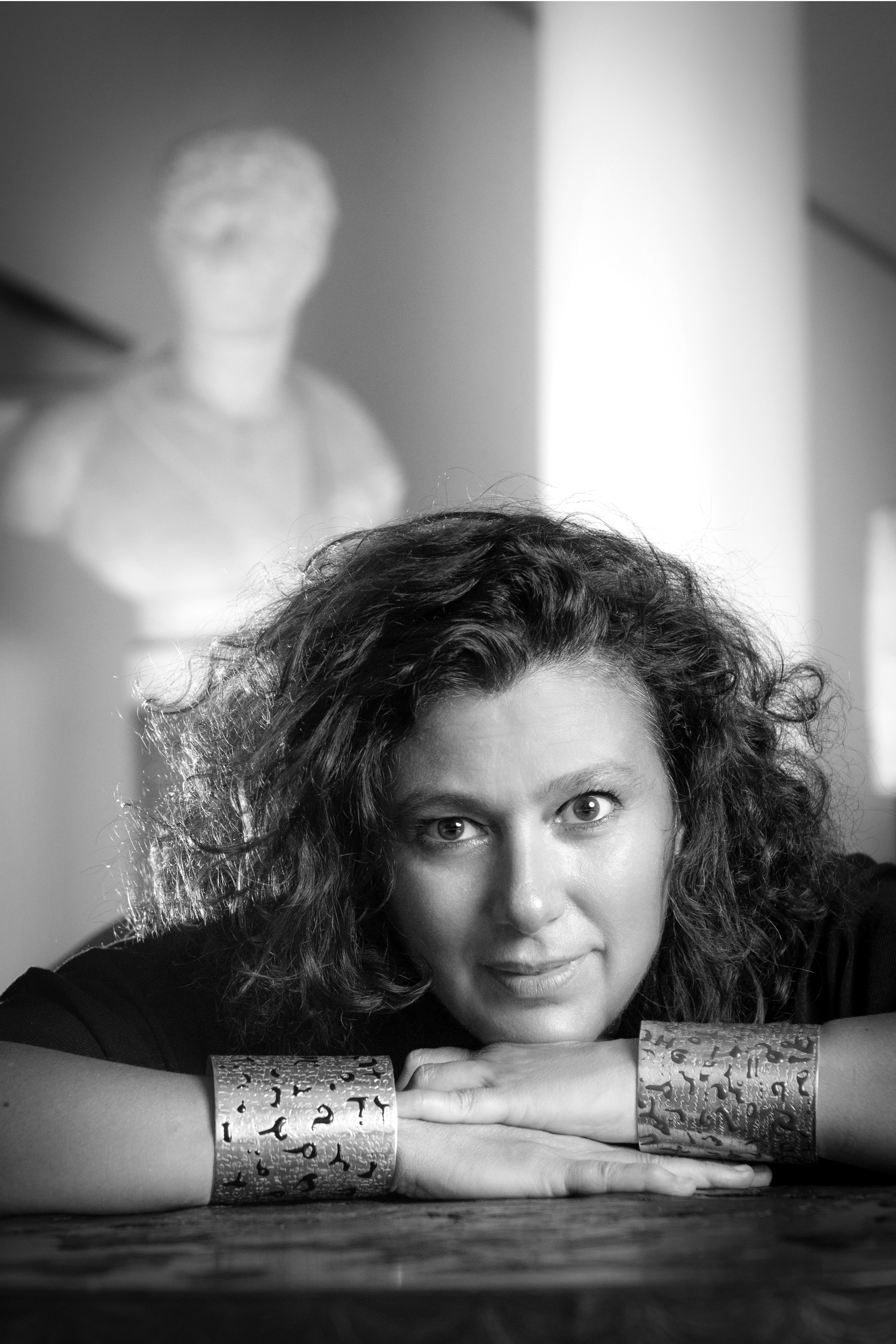 Tania Pistone (b. 1969 in Catania, Italy – currently lives between Sent, Switzerland and Turin, Italy) is renowned for her abstract yet deeply emotional exploration of the visual impact of language. She creates paintings with texts made of seemingly recognisable but often illegible alphabets, thus inviting her viewers to delve into their subconscious and to create their own narratives based on their emotional responses to the artwork.

The artist’s paintings start with the written word as she copies or applies pages of books onto a canvas or a board. The texts are often illegible because they are superimposed onto each other, becoming the base of the work onto which Pistone paints abstract yet personal symbols. Writing becomes a calligraphic sign, losing its meaning yet remaining significant – a trace of a mental process of deconstruction capable of transporting the viewer into a sensorial and emotional dimension.

Tania Pistone’s wearable art project for the Elisabetta Cipriani Gallery came to life following the artist’s Rongorongo series, paintings which depict an imaginary alphabet on gold-leaf plates. In her Rongorongo paintings, Pistone creates symbols in a deliberate attempt to reach an ideal alphabet, which addresses our shared, collective human subconscious which she believes has been shaped by the experiences of our ancestors:

‘The modern human is unable to recover the vision of the world held by our ancient ancestors, a vision which I believe still lives within us. We can only access it is through symbols which represent a story, a colour, a number, or a star… To make a sign vibrate as a symbol our interpretative intent must be to achieve that freedom one feels after making a void. This void gives the symbol some space to activate within us, just like sound vibrations in a sound box. A soundbox cannot produce any vibrations if it is full or if it is completely closed. The sign then becomes a bridge between two worlds, where the subtle becomes thick and turns into matter and where the thick becomes subtle, like in an alchemical reaction. For me, everything happens in this middle point – in this bridge where a sign becomes a symbol.’ – Tania Pistone

The wearable art project Rongorongo invites us to immortalise our own symbolic message in form of a precious metal. Words, dedicated and chosen by the commissioner for the wearer, are engraved by the artist onto fine silver or 18kt gold and then partially covered by painted enamel symbols. Created to be worn as a second skin, the enamelled and engraved precious metals seem to act as a magnet collecting meaningful words which echo silently around and within us. These words will be a personal message from the commissioner, such as a poem, a love letter, a memorable story or a promise.

Tania Pistone has been part of major international exhibitions, including The Art of Humanity at the Pratt Institute in New York, Map of the new Art in Venice, Under One Sky across China, Join The Dots in Trieste, and Imago Mundi – Praestigium Italia in Turin.