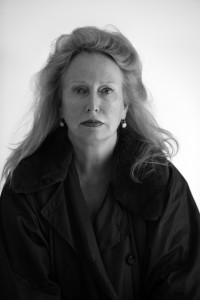 Rebecca Horn (German, b. 1944) is a visual artist, who came to international prominence in the 1980s and is best known for her installation art, film directing, and body modifications projects. Horn is considered to be one of the most influential artists of the Kinetic Art movement.

From an early age Horn developed a virtual obsession with drawing, using it as a medium of communication that she viewed as much less limiting than the spoken word. Horn’s work can be found today in many museum collections around the globe, including The Museum of Modern Art in New York, the Museum of Contemporary Art in Los Angeles and the Tate Gallery in London.

She has also received prestigious awards throughout her career, which include the Carnegie Prize in 1988, the Kaiserring Goslar in 1992, in 2010 Praemium Imperiale in Sculpture, the Grande Medaille des Arts Plastiques in 2011, and in 2012 the Austrian Decoration for Science and Art.

The Solomon R. Guggenheim Museum, New York; The Museum of Modern Art, New York; the Museum of Contemporary Art, Los Angeles, Castello di Rivoli Museum of Contemporary Art, Turin, Italy; the Tate Gallery, London; the San Francisco Museum of Modern Art, San Francisco; the Musée National d’Art Moderne, Centre Georges Pompidou, Paris; the Stedelijk Museum, Amsterdam; the Van AbbeMuseum, Eindhoven and many others. She has participated in Documenta and the Venice Biennale on a number of occasions; she has been the subject of a major retrospective at The Solomon R. Guggenheim Museum, New York and was recently awarded Japan’s prestigious 2010 Praemium Imperiale Prize in Sculpture and the Grande Médaille des Arts Plastiques 2011 from the Académie d’Architecture de Paris.