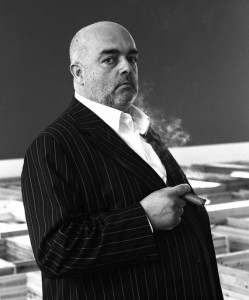 Pedro Cabrita Reis (Portuguese, b. 1956) is one of the most famous contemporary Portuguese artists. His complex work can be characterized by an idiosyncratic philosophical and poetical discourse embracing a great variety of mediums: painting, sculpture, photography, drawing, and installations composed of industrial and found materials and manufactured objects. By using simple materials that are submitted to constructive processes, Pedro Cabrita Reis recycles almost anonymous reminiscences of primordial gestures and actions repeated in everyday life.

Centered upon questions relative to space and memory, his works gain a suggestive power of association, which reaches a metaphorical dimension by going beyond the visual.

Cabrita Reis has participated in important international exhibitions, such as Documenta IX in Kassel in 1992; the 21st and 24th São Paulo Biennales (1994 and 1998); the Aperto of the Venice Biennale in 1997. In 2003, he represented Portugal in the Venice Biennale and participated in the Xème Biennale de Lyon, “The Spectacle of the Everyday”, Lyon, 2009. He has exhibited extensively across the globe, including the Tate Modern, London (2013), Museu Colecção Berardo, Lisbon (2011), Museum for Contemporary Art, Leuven (2011), Carré d’Art, Nîmes (2010), Museo Tamayo, Mexico City (2009), and Fondazione Merz, Torino (2008).