“A jewel, a work of art is a presence that reminds us of the importance of emotion, of life, of our values ​​and ideals”

Paolo Canevari’s art works are nothing short of academic philosophical essays. The artist fearlessly takes on the burden of human history, dissecting and re-appropriating cross-cultural symbols in an invitation to a collective and honest self-awareness. In response to today’s unstable and divided political climate, Paolo’s first wearable art project asks us to re-evaluate the meaning of power, both historically and in our contemporary globalised society. In our interview, we delve into the mind of this brave thinker.

EC: Your Roman She Wolf necklace holds a special place in my gallery’s collection. We both grew up in Rome, where the symbols of bygone empires and their ever-changing heroes are embroidered into the city’s daily life. Your art is created by and against this visual language of power. A recurring theme in your work, and one which you have chosen for your wearable art projects, is animal symbolism. The eagle, the octopus, the beautiful she-wolf – what do these animals mean to you?

PC: What fascinates me about the world of symbols and icons is its capacity for change of meaning, depending on the interpreting culture. Within different cultures, images can assume different meanings and values. Animals, in particular, represent a common thread in which beliefs and mysticism merge and find common ground despite differences in language, religion and geography. The animal as a symbol has always had a predominance in the collective imagination. The eagle is a raptor synonymous with power and strength that has been assumed as a symbol by the United States and by Germany, where it appears on the coins of the two countries. The Wolf / She-Wolf has widely spread symbolic roots, from ancient Roman times to the indigenous cultures of the Native Americans to the Asian legends. For me these animals and their symbolic weight have an evocative character in my imagination, that is transformed through the participation and personal interpretation of those who use them.

Through my artistic thinking I try to bring these symbols to new, more universal meanings by re-appropriation aimed at creating a new mythology.

EC: You told me you set your dining table with a She-Wolf Knife, Eagle Fork and Octopus Spoon, similar to the begemmed silver set of serving cutlery you created for me. Among the guaranteed enthusiasm of your dinner guests, have there been any reactions that you remembered in particular?

PC: People who use and interact with these objects or sculptures are always amazed by how art can fill the most banal gestures with meaning. I like to make these art objects an integral part of our life as I think that art can enrich the soul also by elevating and ennobling the experience of prosaic actions. 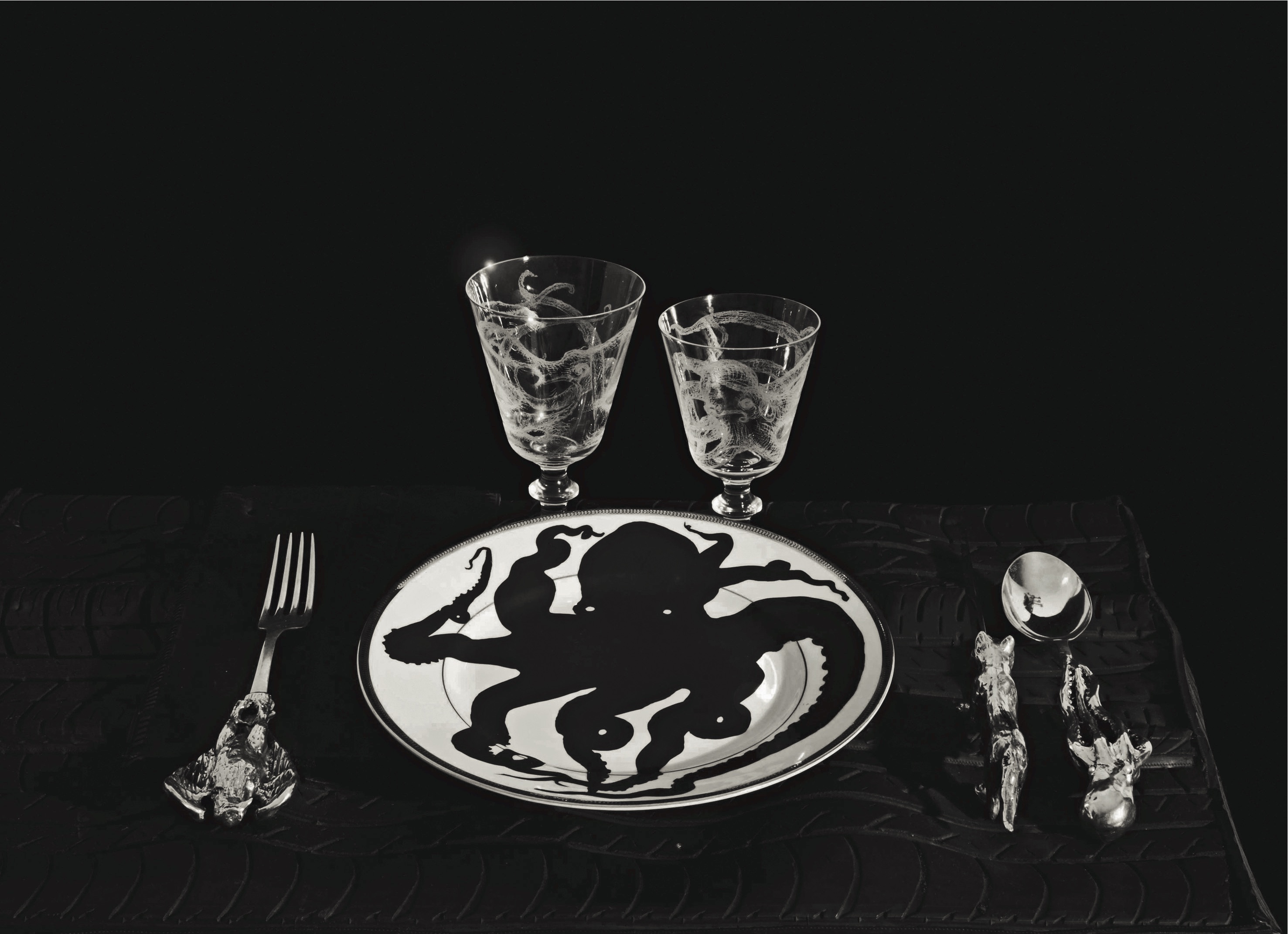 EC: Andrea Camilleri’s new book I Tacchini non Ringraziano (Turkeys Don’t Thank) (2018), which you beautifully illustrated, underlines the beauty and warmth of the animal world that humans have lost because of our individualism, greed and thirst for power. Has working with the writer influenced how you look at and depict animals?

PC: The drawings published in the book I Tacchini non Ringraziano are part of a series that I made in the early nineties called Memoria Mia (1990s). Working with a great writer and friend like Andrea Camilleri was an honor and an opportunity to rethink my role as an artist through his words. The stories are part of a shared memory; in fact, I know Andrea Camilleri since I was a child. Many of the animals in his stories are related to my childhood memories: my dog, my ​​cats and all the other pets that were around my house, including those of our neighbors’ and family friends’, the “Camilleri”. Those pets then became a very important part of my own imagination, which has influenced my artistic research.

EC: The concept of Memory is a very important aspect of your work. I am very intrigued by your story with the iconic Italian film director Federico Fellini. After watching his movie I Clowns (1970) at the age of 9, you wrote a letter to Fellini confessing that after the screening you decided to become a clown, and this letter was personally answer by Fellini with a phone call to your house. When much later in your life, as an art student you saw the filmmaker on the square outside of the Accademia di Belle Arti di Roma, you made the decision not to introduce yourself. You write about this incident, saying that “who stopped me was the artist I wanted to become… I knew that meeting the maestro would kill the memory”. Could you explain in more detail your relationship with your own memory?

PC: Being an artist, within me exist extremely important memories of my personal, subjective experience of the world: places, smells, materials, the light that I observed during my childhood and adolescence. Then there is the memory linked to a historical culture, to an aesthetic sense absorbed over the years; and being born in Rome it is impossible to be exempt from this intense presence of history. My love of materials is linked to precisely this idea. The sense of history that a material bears witness to and its political value are fundamental conceptual data in the formation of my art. In my case the story – the memory – is a baggage that I carry on my shoulders, a heavy baggage but from which I can draw inspiration, support, examples.

EC: Artistic traditions are also family traditions in your case. You come from a long line of artists. Your grandfather Angelo Canevari was a mosaicist, whose work graces Foro Italico, an iconic sport complex in Rome built during Italy’s Fascist regime. Your Roman She-Wolf necklace is created using the ancient, practically no longer in use, technique of micro-mosaic. Is the necklace paying homage to your family?

PC: The idea of ​​the micro-mosaic comes from my passion for research and my desire to bring back old techniques. Of course, the connection of my work with the mosaics of my grandfather Angelo is indeed a tribute to his story and that of my family. In the necklace I used the Roman She-Wolf as a personal icon because it has become an important symbol in my art. I have reused the icon of the She-Wolf in different works and different materials, as for example in the work Souvenir (2015) which is part of the Olnick-Spanu Art Program at Garrison US.

EC: You once said, “I don’t want my work to be permanent; I want it to be a memory, to have a metaphysical presence”. I do hope, however, that your wearable art will have a long life! With its historical association with power and durability – what did it mean to you to work in the medium of jewellery, using traditional precious materials?

PC: When I speak about a metaphysical presence I am referring to the part of a work that we possess in our memory, to that space that art manages to create within ourselves, to that unfathomable emotion that art gives us and which enriches us inwardly. A jewel, a work of art is a presence that reminds us of the importance of emotion, of life, of our values ​​and ideals. This value is testified to me by the precious materials that represent a high, spiritual value.

EC: At the opening-night performance of your 2010 exhibition Nobody Knows at the Centro per l’Arte Contemporanea Luigi Pecci, you sat with your back towards the audience on a large globe made of truck tyres. It was a compelling metaphor for the power and freedom an artist has to create and change the world, and the ownership he or she have over their creations. Especially in your installation and performance work, you have a lot of control over how your ideas will be presented. Jewellery becomes linked to the identity of its owner on psychologically and also very physically. With wearable art, you as the creator, are forced to let go of your work and allow its wearer to take that ownership of it. How does that make you feel?

PC: A work of art is a spirit that the artist creates and then leaves it as a legacy to the world, transforming whomever owns the work into a companion, a guardian. This creates a relationship, a bond that will in turn create its own story of affections, values ​​and memories. So I’m not worried about letting go of my work, I’m happy that a part of me can be shared and can somehow give something to someone. The freedom of an artist lies in his or her choices, morals, ethics of work. It is in this dimension that the artist’s personal world develops, and from this world the artist can discover new visions and perspectives on the archaic mysteries of art, life and death. 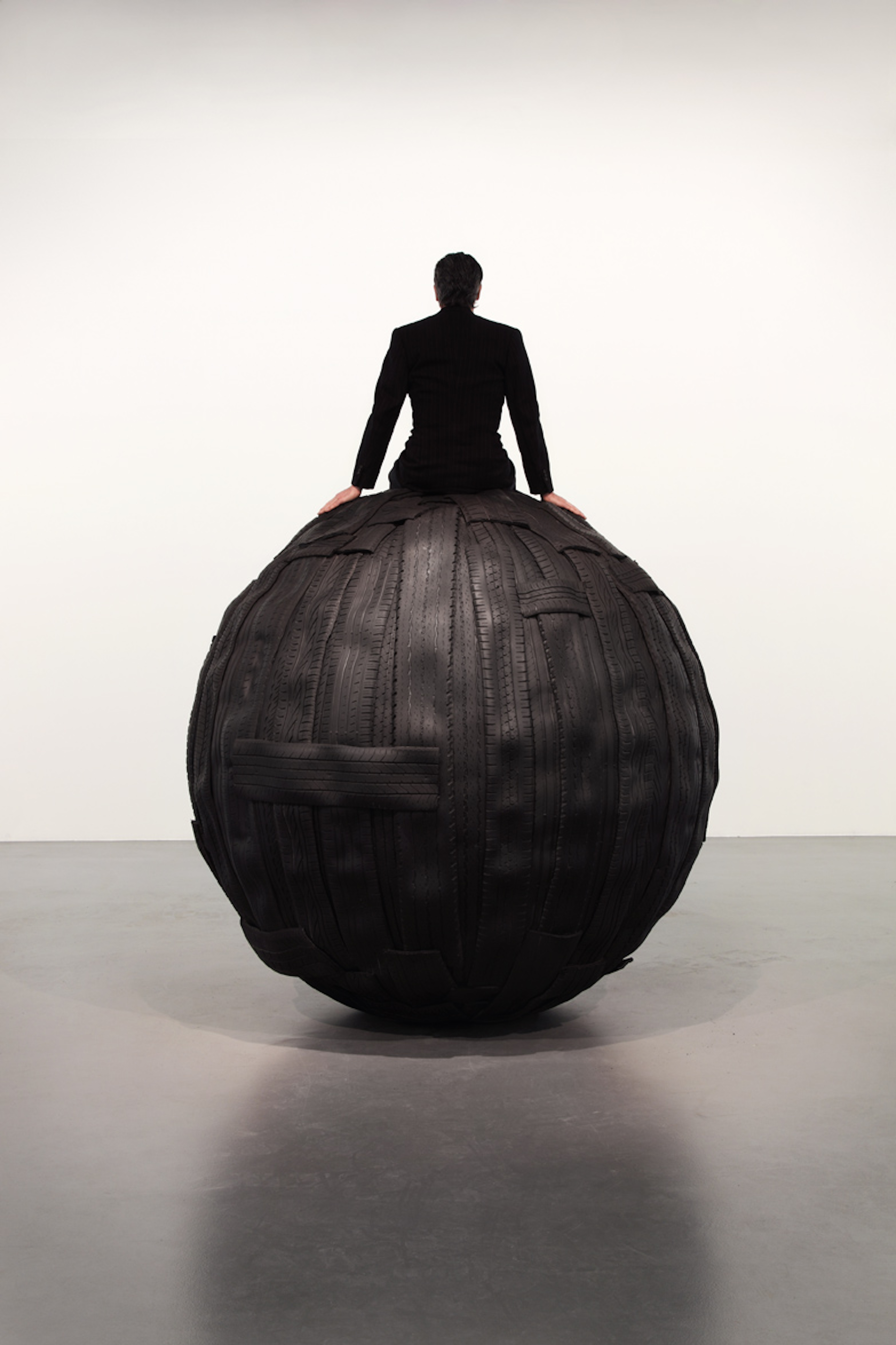 EC: If and when, and I hope very soon, you decide to create another wearable art project – is there anything you would do differently?

PC: I would like to further develop the symbolic relationship of animals in terms of their symbolic representation of power. I am fascinated by the idea of ​​ancient symbologies that come back in a new guise, and exist with an ancient spirit in a contemporary territory.

Recognised globally as a leading visual artist of our time, Paolo’s work is as beautiful as it is philosophically compelling. The Piovra (Octopus) bracelet elegantly wraps around the wrist of the wearer, creating a new dialogue between ancient symbolism and our contemporaneity. The Lupa Romane (Roman She-Wolf) necklace has an evocative character in the artist’s imagination that will be transformed through the participation and interpretation of those who wear it.

To view the artist’s powerful jewellery and objets d’art, please book an appointment to visit our gallery.