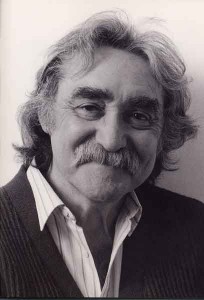 Jesús Rafael Soto (Venezuelan, 1923-2005) was one of the most important artist in the Op Art and in the Kinetic movements of the 20th Century. Beginning his artistic career at a very young age painting posters for movie theatres, he then attended the Escuela de Artes Plásticas y Artes Aplicades in Caracas where he met fellow students Alejandro Otero and Carlos Cruz-Diez.

Living in Paris from 1950 marked the beginning of his work on optically moving forms and the repetition of identical geometrical units such as “Vibration Structures” and “Penetrables”, environmental installations with a great number of hanging rods or threads, as well as “Kinetic Walls”, installed today on public buildings all over the world.

In 1973, the Jesús Soto Museum of Modern Art opened in Ciudad Bolívar, Venezuela, with a collection of his work.