The 8th of March marks the return of International Women’s Day, and with it, Elisabetta Cipriani Gallery honours the multidisciplinary practices of wearable art projects and collaborations with leading female contemporary artists.

On this day, the world brings major recognition to the achievements of women from all industries. It represents that everyone deserves to have a voice, to tell their story, and to choose how they want to convey it. This year, International Women’s Day calls for the theme of Each For Equal, that the world broadens its perceptions beyond seeing gender and focus on what’s truly important, and so we salute the creative talents and ingenuity of women that continue to become so accomplished.

For this occasion we would like to celebrate the works of five inspirational female artists who have challenged their artistic practices, often working with sculpture, painting, and architectural design, and redefining what it means to wear a work of art. Experimenting with different materials such as gold and silver, these artists confronted the major complexities surrounding wearable art, how it caters to wearer, how it reflects the characteristic of the artist, and how it presents a design that is fundamentally different from their other artworks.

The resulting wearable art works produced by these visual artists individually accoutres the wearer with a second skin expressed through sculptural forms. Each piece demands a dual engagement with the wearer, to be worn, to exchange emotion, and to delve into a dialogue with both the wearer and the artist. The wearable piece becomes a performance itself as the body moves with the art piece. It is contemporary, it grants a unique form of art where the dualism of both wearable piece and the body both become an artwork of which the wearer intimately holds on to.

An entangled labyrinth of red yarn traversing spaces, Chiharu Shiota’s emblematic works gained her reputation as one of the world’s major installation artists. Her wearable art project Carrying Memory strongly narrates this journey of memory and human experiences. Suspending a small key into the necklace of gold wire that gradually expands out into the space as an extension of the body, this trance-like visual language between Shiota’s work, the wearer, and the viewer, places a great emphasis on intimate exchange of secretive thoughts and emotions. 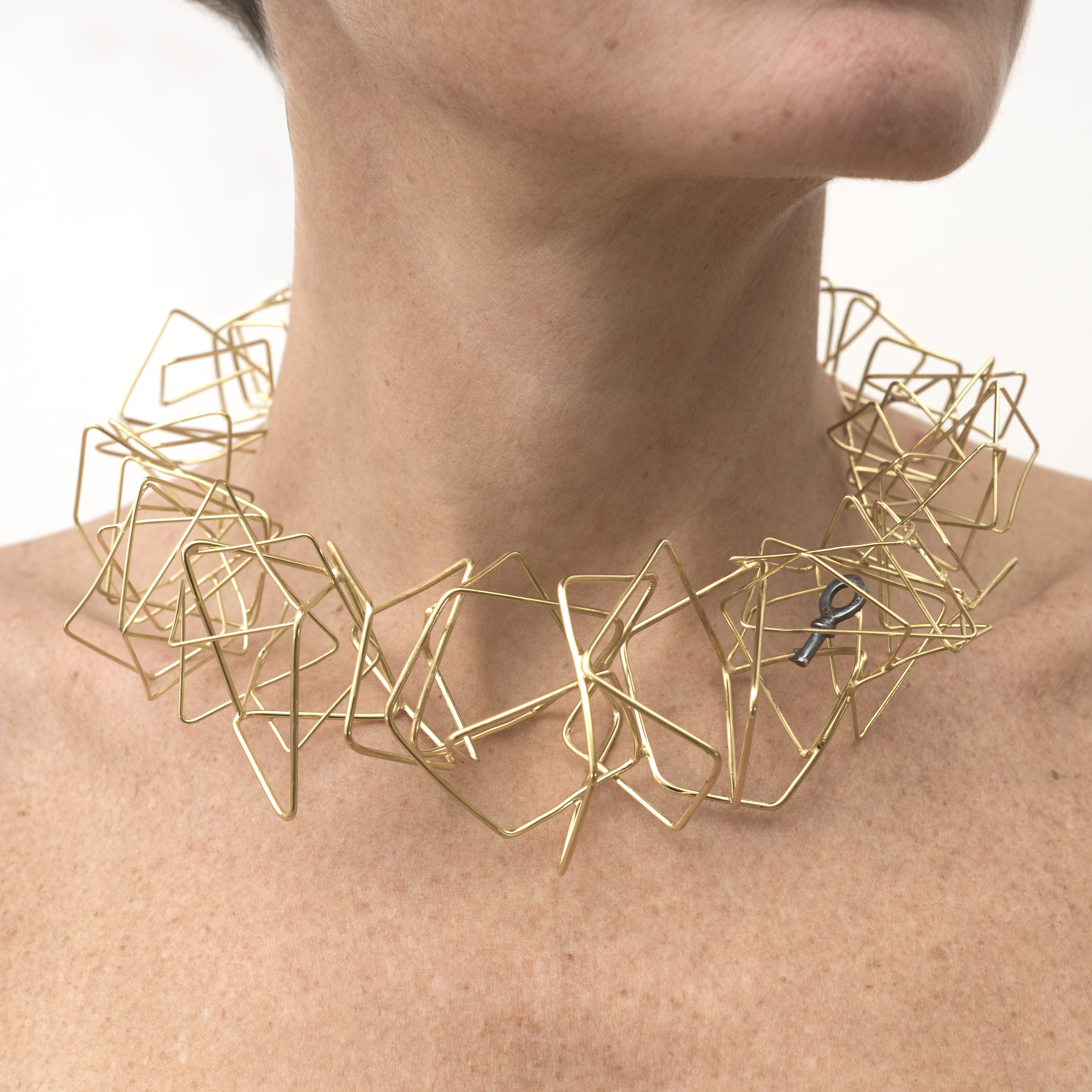 Originally used to painting, Shiota’s works instead expand into multitude of red strands that extends beyond the canvas, this abstract expressionist quality that draws into the air itself is beautifully reflected through the extended gold strands that composes Carrying Memory. Often engrossed with social political commentary, and the displacements of memory and identity, Shiota’s powerful metaphorical approach of conceptualising  her strands as human veins, interweaves her yarn with an object from everyday life such as a key, and intricately explores her visual work as examining the little evidence left behind by past human lives.

With Carrying Memory, Shiota translates that conceptualisation of the traces of human experiences. In this version of a ring, which doubles as a pendant, Shiota does not incorporate any object into the tangle of gold strands, and instead the ring intertwines and unifies with the wearer’s hand, it incorporates our own experiences and stories through the artwork itself.  Shiota plays with the notions of temporality as Carrying Memory by itself is never completed. She isolates this interaction within the artwork and us, it asks for this secretive exchange with our own story. Her love to investigate beyond the boundaries of language, culture, and identity, has left a deep impression into our visual experience from how visual and interactive her work is, and wearing Carrying Memory is that experience that becomes so personalised to ourselves.

A ruthless, yet beautiful biosphere, is what can only describe the works of Michele Oka Doner. A hunter and gatherer, Doner finds her inspiration from her collected objects of intrigue, from archeological finds such as fossils and stone tools, to nature formed objects such as bird skulls and sea shells. She channels this interest into everyday rituals, incorporating organic forms that resemble tree bark, the human body, even reflecting shapes of the human body. Through her sculptural and decorative works, Doner refashions everyday objects, and re-conceptualises our ceremonial aspects of enjoying the daily life. 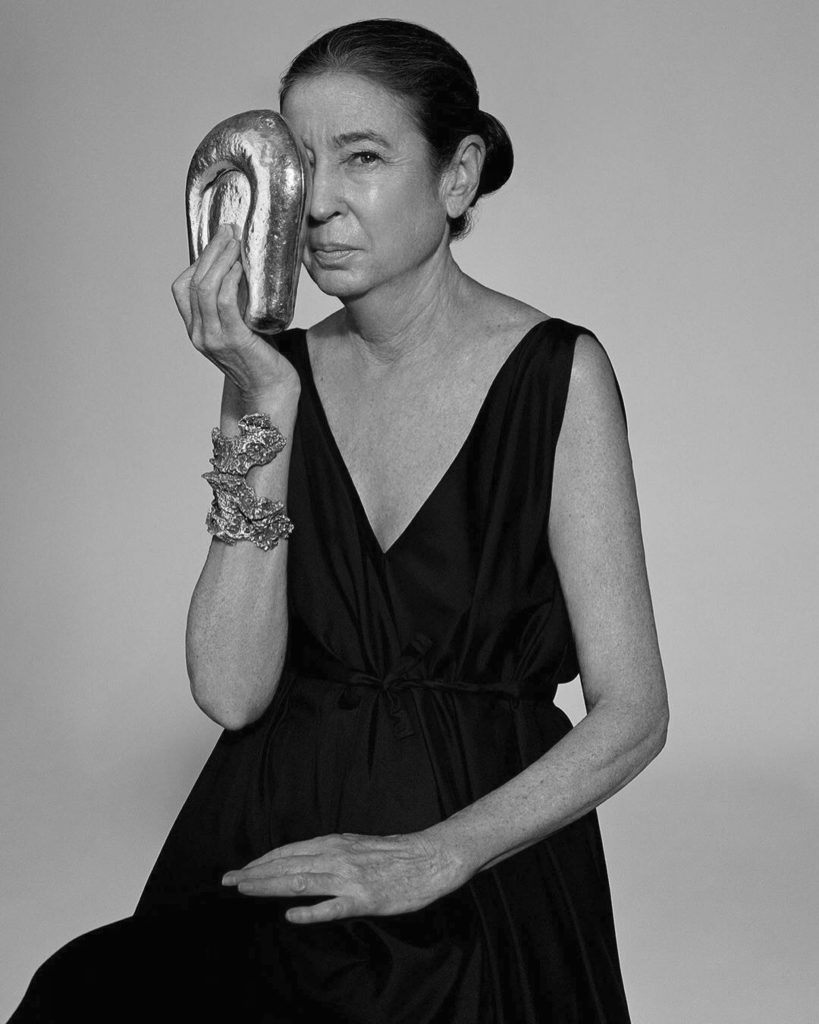 In her project, Goddess Minaudière, we see Doner reinterpret the rituals surrounding a minaudière. This is commonly known to be a decorative small box-clutch normally decorated with embellishments, and they are often used for a special evening event. Doner deconstructs our understanding of the minaudière, and erases its traditional box form. Goddess Minaudière is made devoid of any such decorative gemstone, and humanises its form, strongly evoking themes of femininity sculpted through the body contours of the goddess of love, Venus. This inversion of shape and decorative design accentuates our focus on the form of the clutch, now a subtle, yet elegant piece of art that becomes an extension of the body.

In celebration of her solo exhibition at the Palazzo Bentivoglio earlier this year, we once again revisit Sissi’s project collaboration, Nidi(Nests). With an artistic focus of anatomical study in relations to environmental elements, the artist brings forth new ways to interpret jewellery, as the work of art then transforms into a second skin of light and gold for the wearer. 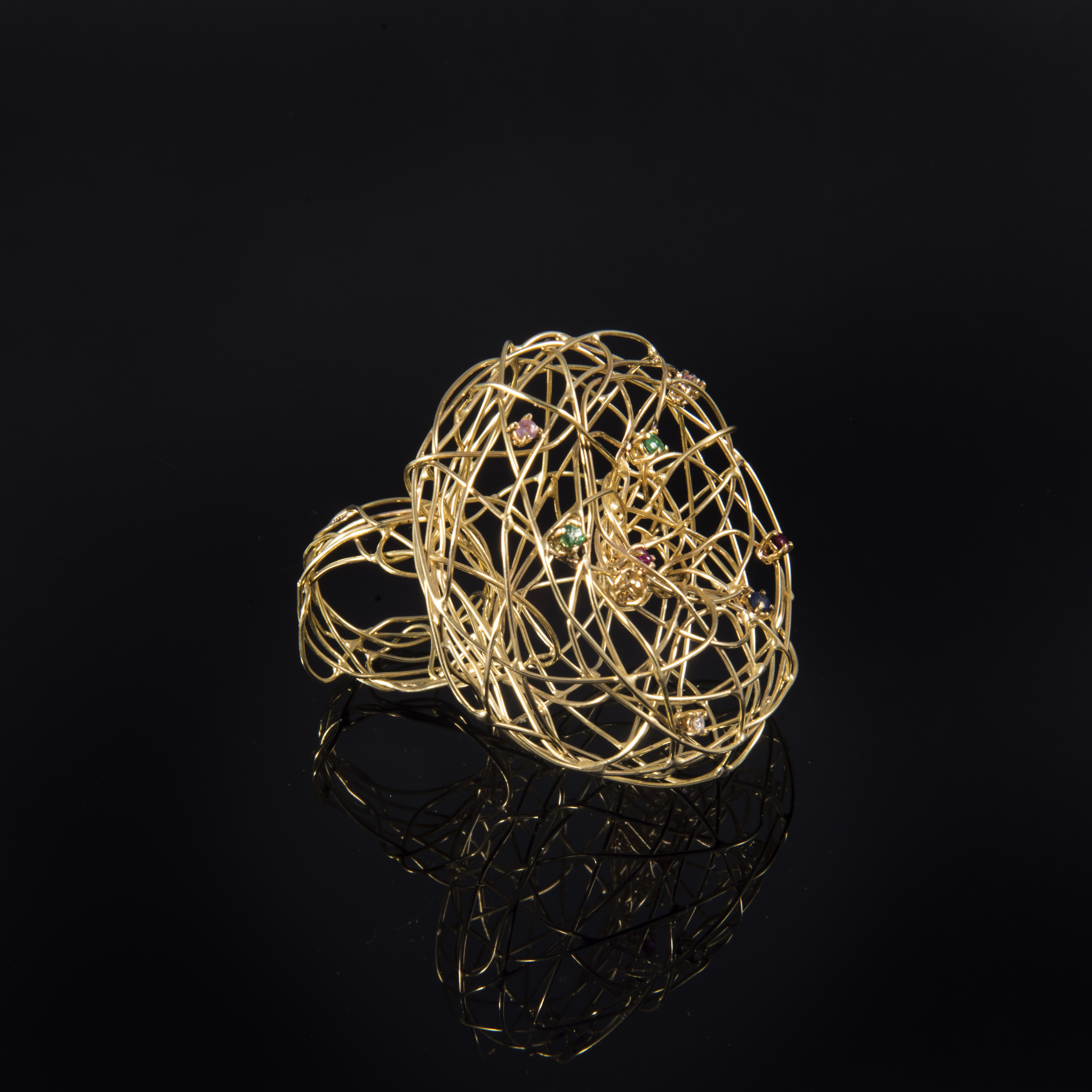 Sissi interlaces the symbolism of the birds nest with the anatomy of the human body by having the entire project completely handmade by herself, creating an ornate ring, a pair of earrings, and brooches that re-transforms into pendants. These embellished, yet delicate pieces act like sculptural works of her own. Carefully interwoven and welded with gold and silver threads, decorated with precious gemstones, Sissi’s contemplative process re-imagines a sculptural piece of art to work in tandem with the single wearer. 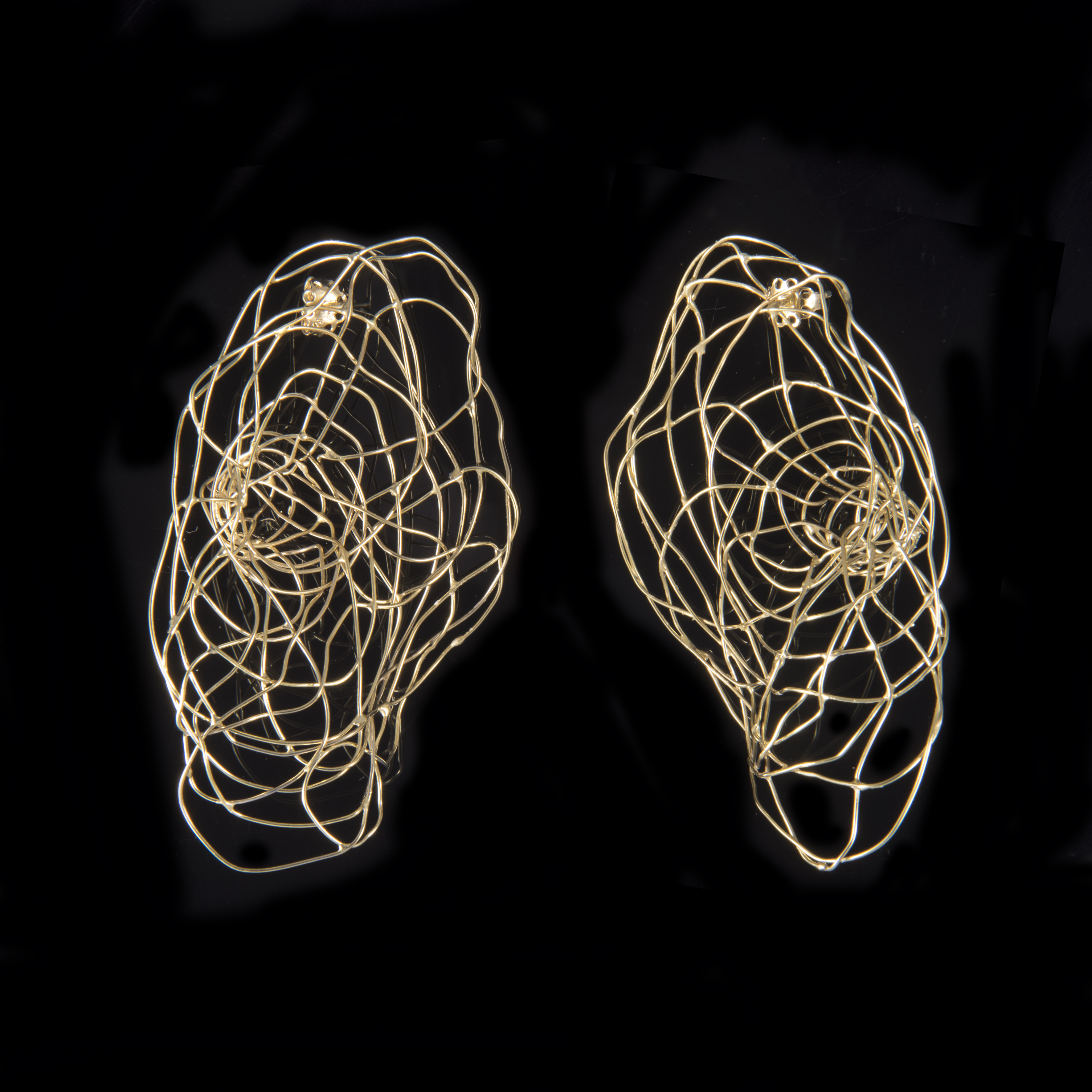 It was pivotal to Sissi that she was personally involved with the crafting of Nests. Her hands-on experiences reflected in the handcraft deeply incorporates her conceptualisation of the delicate works of art as an extension of herself and of the wearer. Nests draws its symbolism from natural nests which provides a safe place, and is transformed into a second skin of golden threads. Her compassionate characteristics reflected into wearing something beautiful and delicate provides feelings of security on the body, embracing the individual’s own thoughts and feelings. 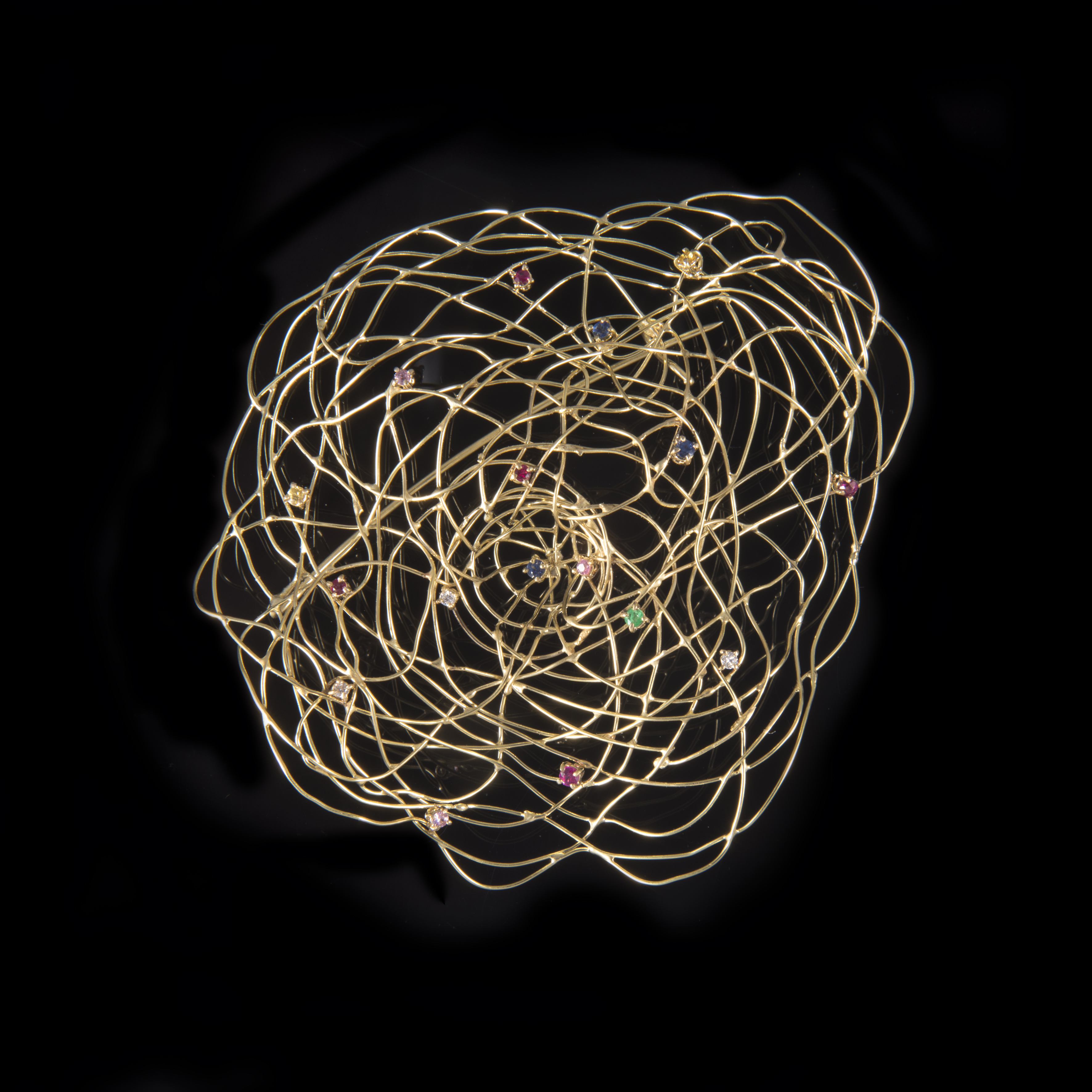 Creating this sculptural piece for the one and only person to be unified with it, Sissi’s concept of the nest being a place of protection becomes very thought provoking as it is translated into a wearable piece of art. Nests can be displayed as a sculpture when taken off, and becomes a sculptural work of art that coincides with the individual when worn. Sissi’s meticulous crafts embedded within her anatomical investigations of wearable sculpture has metamorphosed her works into a second skin, akin to the wearer’s ritualistic daily life.

Liliane Lijn became a significant pioneer in the Kinetic Art movement, revitalising new ways to visualise movement. Her works embalm the surrealist overlap of science and technology in continuous dialogue with language and poetry. Lijn’s wearable art project blurs the realms of nature and movement. Her wearable artworks are deeply engaged with the literatures of the Old Hebrew testament, where the word ‘glebe’ symbolised the primal earth, its vitality of which formed the first humans. Lijn strengthens this relationship between the wearer and nature, as her works serve as an ornament to remind us of the vital essence of the planet’s life, that the wearer is adorned with elements of the primal earth, to wear the ‘glebe’. 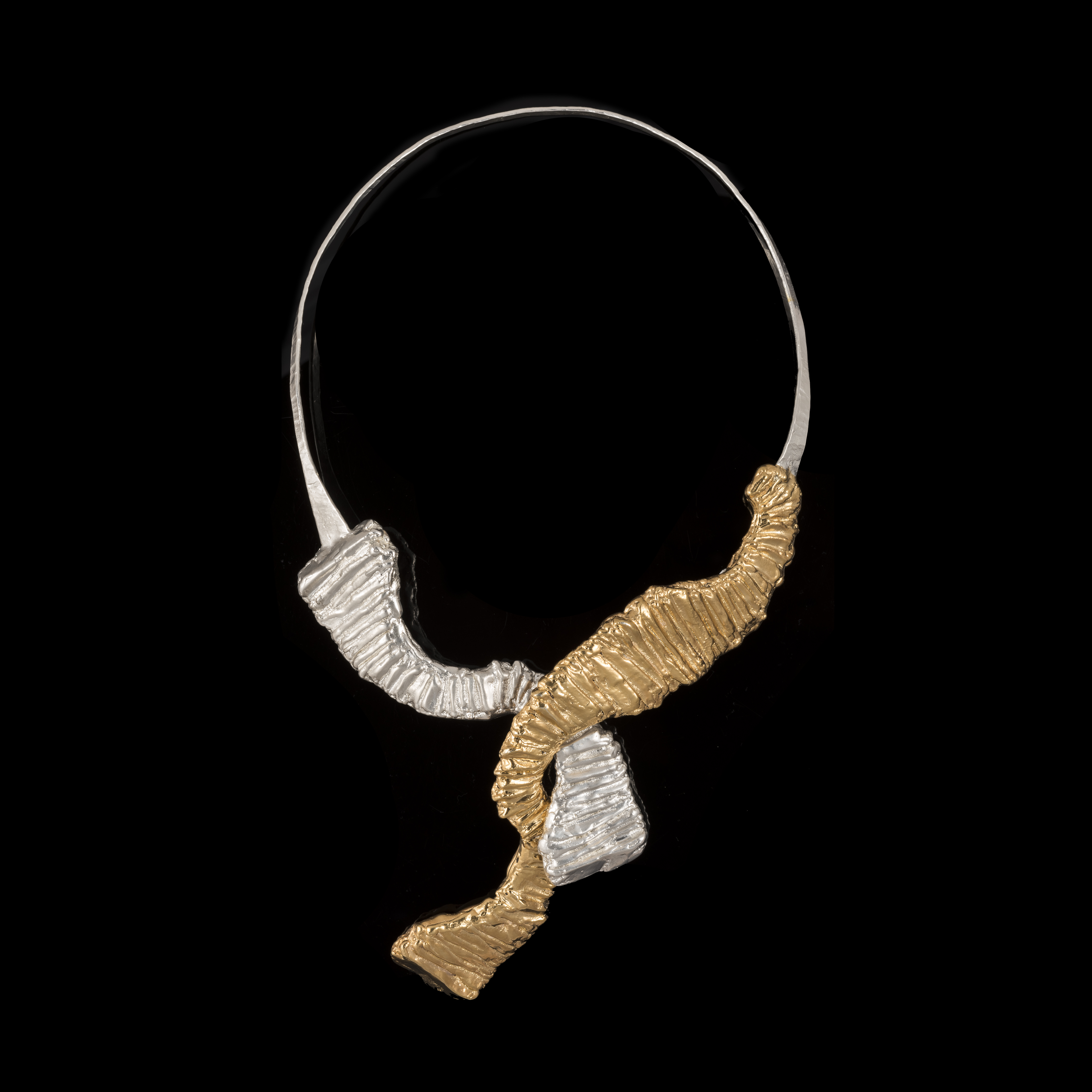 Evocative of her visual abstractions and material manipulations, Lijn’s concept of the primal earth are finely tuned with the geological sciences. Each piece characterises the highly volatile liquid magma that keeps the planet alive and constantly rotating. This same magma that reaches the surface from volcanic eruptions, maintains the cycle of life and death, are drawn into continuous momentum of renewal and vitality that Lijn echoes in her wearable sculptures. Lijn took a very personal, unmeditated approach with her projects, her Magma and Fossil series began by moulding a clump of very hot wax around her wrist. The high temperature and the malleable nature of the wax manipulated the mass to resemble elements from the earth. As technology has allowed her to work with a diverse range of materials in her sculptural work; instead of cast metal, electro-forming was used to carefully reflect the same earthen surface texture reinforced into unique adornments. Lijn’s rather sculptural approach into creating wearable artworks re-transforms this relationship of viewing and interacting with art, as we wear the work we become the integral piece to engage in dialogue with the sculptural form.

“I try to make work that will allow people to still their mind and look at things with a different eye.” – Liliane Lijn

Finally in commemoration of International Women’s Day, we remember the projects that exemplify the ingenuity of Zaha Hadid. Internationally recognised as one of the greatest architects in the world, Hadid had transcended architectural geometry in the widely male-dominated industry of architecture, encompassing the complexities that comes with examining topological surface textures, her dazzling edifices have reinvigorated what we define as architectural design.

In collaboration with The House of Aziz and Walid Mouzannar, of whom the Mouzannar family has long dedicated their lives into creating high jewellery since the 18th Century, Hadid reinforces her architectural investigations of dynamic, voluptuous, geometric designs, and offers new exciting forms of beauty; fine jewellery of a fundamentally different feature. Launching her Silene series, the sixth generation of Mouzannar designers have captivated the design mythos of Hadid, of whom her unique, statement pieces address these geometrically complex, even organic compositions. 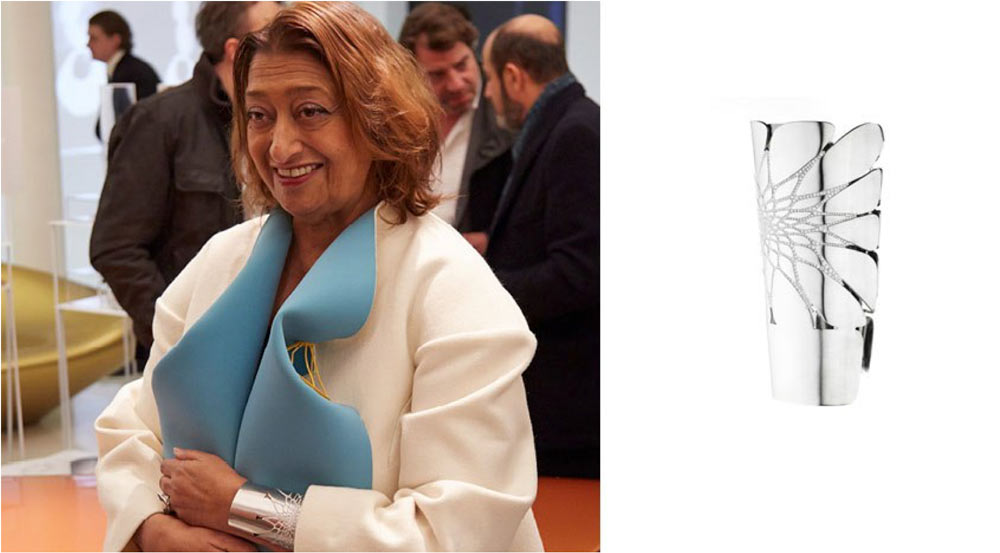 Silene demonstrates Hadid’s understanding of materiality, the expressive yet serpentined natural formations, such variations of material display intricate web patterns that spread and wrap itself so carefully around the wearers hand. The complex pattern resembling the veins of a leaf, encrusted with white diamonds, envelops the white gold cuff that creates such fluid forms, yet interrogates geometric formations in contrast to those of organic development. 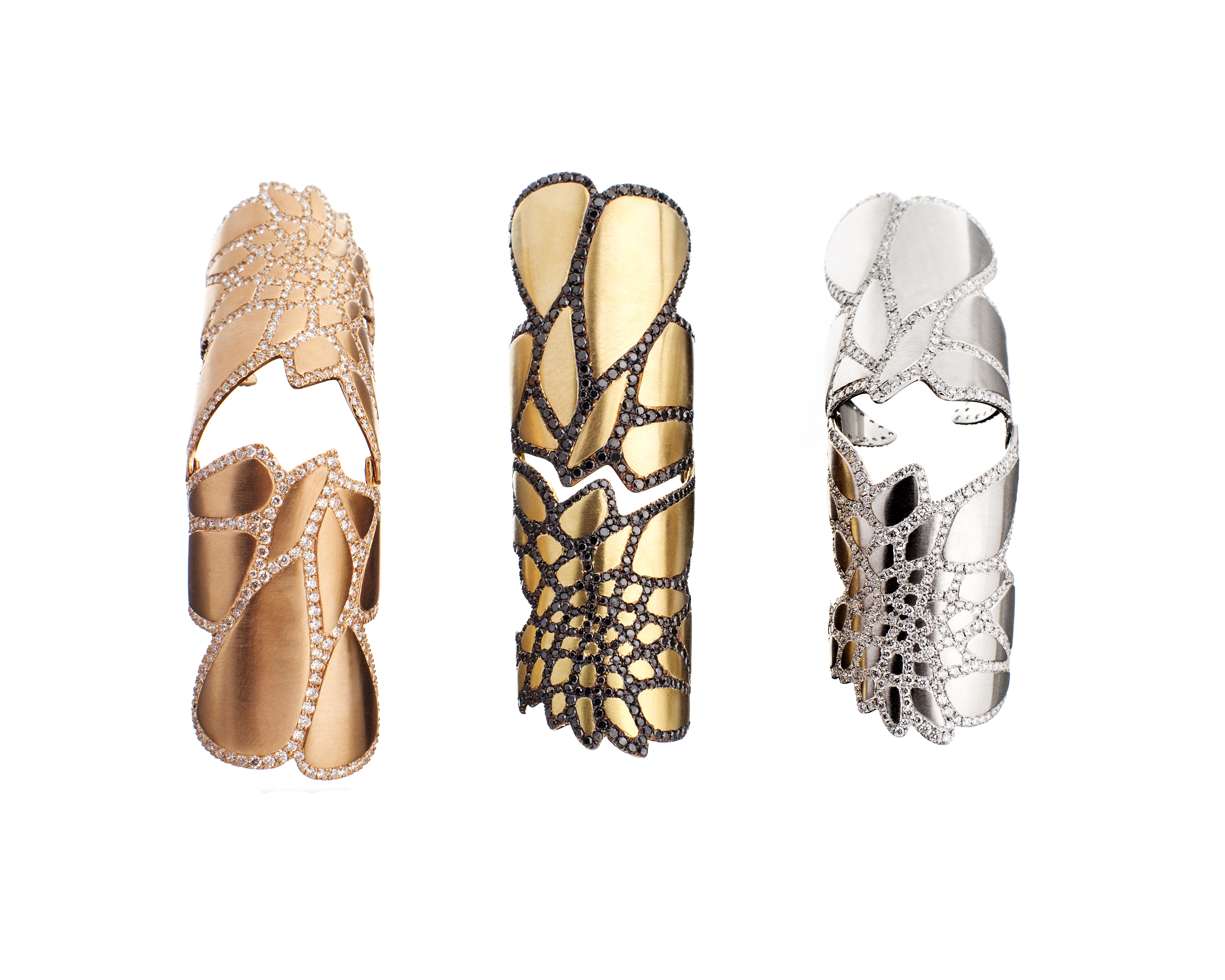 Hadid’s wearable sculptures displays this meditation of topological spaces. Her incredibly abstract and geometric architectural designs have created such a distinctive mark on re-imagining skylines of the modern era, that the artistic and mathematic uncertainty she translates into wearable art creates something that captures a strong spirit that is delicate, yet rich and feminine. Thin lattices emanating from a centralised oval shape, Silene Ring II demonstrates Hadid’s examination with the beauty of natural forms in an amalgam with the unique properties of its materials. 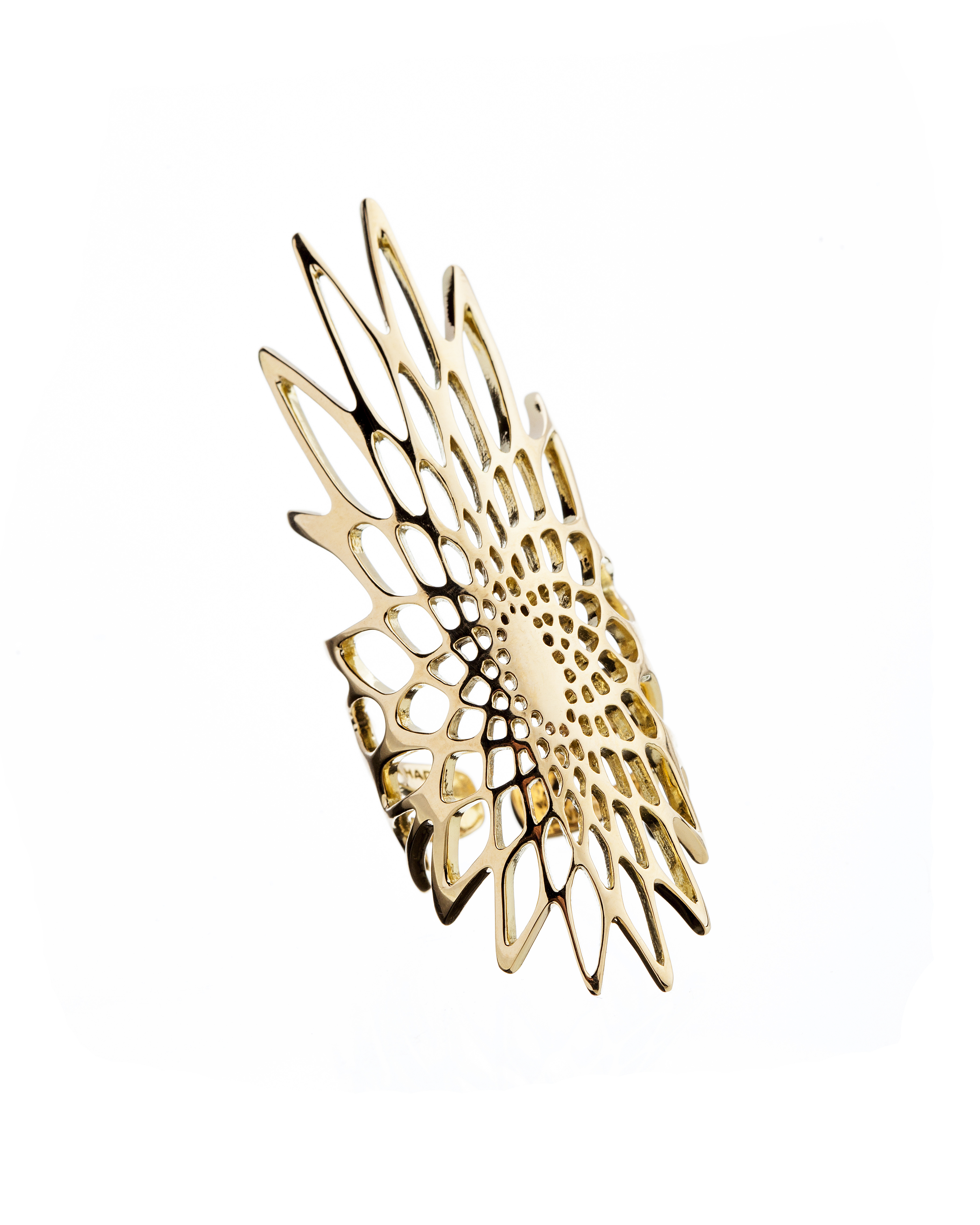 Zaha Hadid’s Silene series highlights the ingenuity of fine jewellery  exemplified by the House’s designers. Each Silene piece engages in such complex, yet elegant dialogue, that that it is not only emblematic of her innovation as one of the greatest architects to have opened our eyes around the world, but it also celebrates her awareness to materiality  in the rich history of  and tradition of Lebanon’s jewellery making.

Today we thank the collective individualism of the artists who expand the possibilities of contemporary jewellery design. Their creative talents continue to inspire us, provide excitement and beauty into our daily rituals, reconfigure our understanding of what it means to wear a work of art.