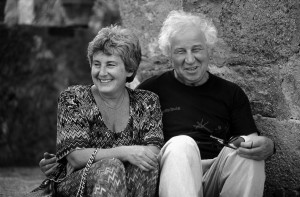 Ilya & Emilia Kabakov (USSR, b 1933) are Russian-born, American-based artists that collaborate on environments which fuse elements of the everyday with those of the conceptual. While their work is deeply rooted in the Soviet social and cultural context in which the Kabakovs come to age, their work still attains a universal significance.

Today they are recognised as the most important Russian artists after the post war. After leaving the Soviet Union in the late 1980s, Ilya Kabakov’s satirical drawings developed into his signature “total installations” – all encompassing environments accompanied by tragicomic narrative texts. Made in collaboration with his wife Emilia Kabakov, these nostalgic installations often incorporate forgotten elements of Soviet life, such as social realist propaganda, worn-out kitchen items, and communal living arrangements.

The Kabakovs’ work has been shown at the Museum of Modern Art, the Hirshhorn Museum, the Stedelijk Museum, and in the Whitney Biennial. In 1993 the duo represented Russia at the 45th Venice Biennale. In 2017 they will be doing a retrospective at Tate Modern, London