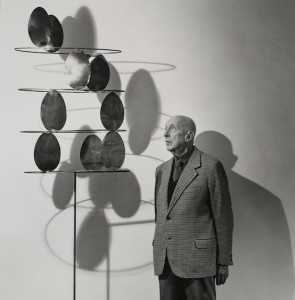 Fausto Melotti (Italian, 1901- 1986) was an Italian sculptor and painter, who worked in an array of materials, including wood, wire, plaster, and ceramics. Melotti was known for creating curious Surrealist sculptures in which symbolic forms express what has been described as the “inner realms of human experience.”

Early on in his career Melotti was rejecting the traditional sculptural emphasis on volume and form, resulting in abstract sculptures in white plaster or thin metal. Melotti’s artistic career spanned the mid-20th century, and fellow Italians Georgio de Chirico and Lucio Fontana have influenced him. His wire mobiles and “cages” have been compared to the work of Alexander Calder and Alberto Giacometti.

With their repeating motifs and rhythmic structures, these works also reflect Melotti’s strong interest in musical composition. Later in his career, his work became increasingly figurative, a turn described by some critics as a postwar return to humanism. Melotti studied mathematics and physics before graduating with a doctorate in electro-technical engineering in 1920. His work was shown in solo and group shows in New York, London, Zurich, Frankfurt and Paris. Melotti died on 22nd of June 1986, the same year as the 42nd Venice Biennale commemorated him with the Golden Lion.