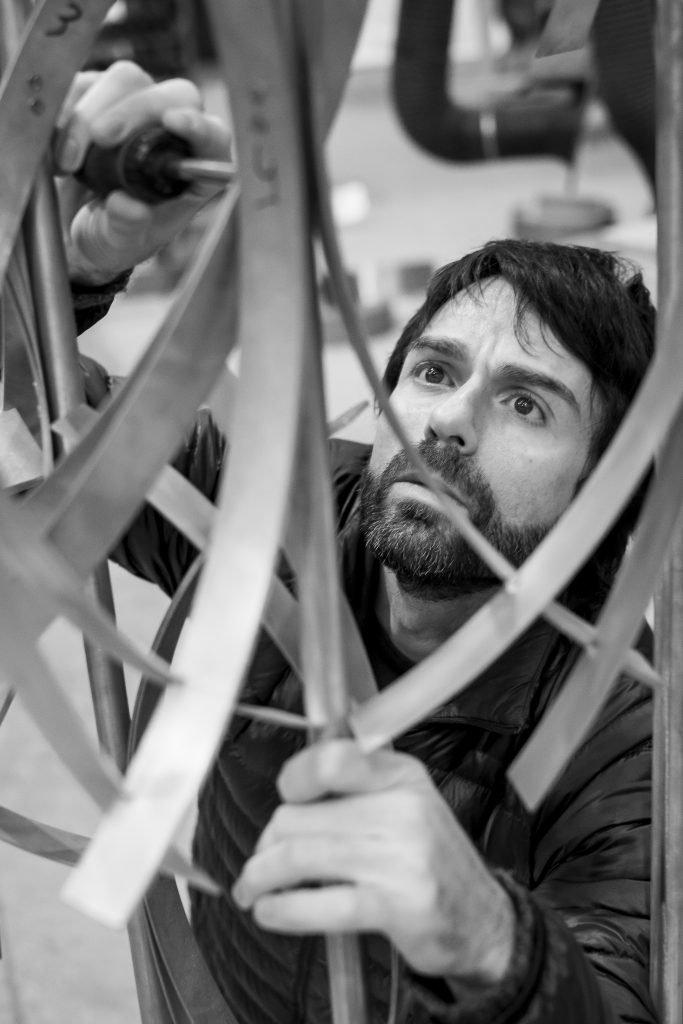 David Rodríguez Caballero (b. 1970) is a Spanish contemporary sculptor based in Madrid and New York. Rodríguez Caballero’s artistic practice falls within the context of abstraction, with his distinctive use of organic geometry. The artist has explored the poetics of the fold and the curve in his sculptures over the past two decades. Metal serves as an important medium for the artist, which enables him to explore and experiment with his core theme: light.

Rodríguez Caballero began producing jewellery in 2008, which has played a very important role in the artist’s career as a sculptor. The medium of jewellery provides Rodríguez Caballero with the unique opportunity to experiment with his key elements, the curve and the fold, as well as gravity-defying support designs, he has subsequently transferred into sculptures.

Caballero’s works have been exhibited in galleries, museums and public institutions all over the world, including the Moscow Museum of Modern Art (Russia), Würth Museum in La Rioja (Spain), the Museum of Navarra (Spain), the Oteiza Foundation Museum (Spain), and other institutions across Europe and the United States. In addition, the artist has been awarded the First International “Bodegas Dinastía Vivanco” Engraving Award (La Rioja, Spain, 2008), First Prize of the IX Mostra Colección Unión Fenosa (Unión Fenosa Museum of Contemporary Art, Spain, 2006), Volksbank Paderborn First Prize in Painting (Paderborn, Germany, 1996) and the Pamplona Young Artists First Prize in Painting (Pamplona, Spain, 1995), among others. Click here to view David Rodríguez Caballero’s website.