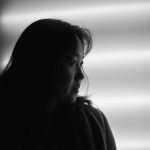 Chiharu Shiota (born 1972, Osaka, Japan – currently living in Berlin) is a Japanese performance and installation artist. Shiota primarily known for large scale installations such as The Key In The Hand (2015) with which she represented Japan at the 56th Venice Biennale.

Educated in Japan, Australia, and Germany, Shiota interweaves materiality and the psychological perception of the space to explore ideas around the body and flesh, personal narratives that engage with memory, territory, and alienation. Her signature installations, which consist of dazzling, intricate networks of threads stretching across gallery rooms, made the artist rise to fame in the 2000s.

Although Chiharu Shiota originally studied to be a painter, during her residency at Canberra School of Art in Australia, she began to feel constrained within the purely painterly medium. In 1996, Shiota used the thread for the first time.

The starting point for many of Shiota’s installations are collections of used possessions; belongings, haunted with memories that represent expressions of human actions. This conception then leads to vast, room-spanning webs of threads or hoses, she links abstract networks with concrete everyday objects such as keys, window frames, dresses, shoes, boats and suitcases

‘Weaving gave me the opportunity to expand, and I feel as if I am drawing in the air on a limitless space.’ – Chiharu Shiota

She has participated in the Venice Biennale, 2015; Aichi Triennale, 2010; Gwangju Biennale, 2006 and Yokohama Triennale 2001, amongst others. Her works are included in The Leopold Private Collection, Vienna; 21st Century Museum of Contemporary Art, Kanazawa; The Hoffmann Collection, Berlin and The National Museum of Modern Art, Tokyo.