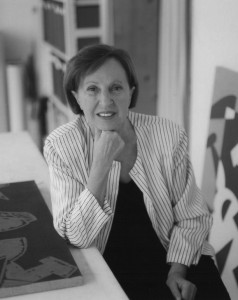 Carla Accardi (Italian, 1924-2014) was an Italian painter who contributed significantly to the acceptance of abstract art in Italy, best known for her abstract paintings on Sicofoil, transparent plastic sheeting.

Her early paintings focused on the use of colour and geometric shapes, depicting circles and signs. Accardi started making her first paintings in black and white. In 1946 she moved to Rome where she lived until her death at the age of 89. She co-founded Forma 1 (1947-51), a Marxist-leaning artist group comprised of fellow Art Club affiliates.

During the 1960’s she began painting abstract calligraphic shapes using blue or green hues on a red background.

In 1996, Accardi was honored as a member of the Accademia di Brera in Milan.

Accardi studies at the Academia di Belle Arti in Florence.